Russians in APC Run Out of Gas. Passing Ukrainian Motorist Offers to Take Them Back to Russia

Are Russian supply lines so stretched that they are unable to refuel military vehicles invading Ukraine? 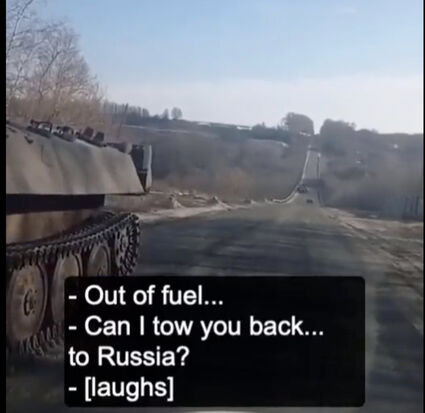 Out of fuel in Northern Ukraine

Making the rounds on social media is a one minute video of an interchange between 2 or 3 Russian soldiers in an armored personnel carrier, and a passing motoriston a country road. "Are you guys broken down?" the man asks the soldiers.

"Out of fuel," one Russian soldier says.

"Can I tow you back to Russia?" the Ukrainian jokes. The Russian soldiers laugh sarcastically in reply.

The Ukranian drivers asking the soldiers if they know where they are going. One says, "to Kyiv," and asks, "What are they saying on the news?"

The Ukrainian responds, "Well, while everything is on our side, yours and prisoners surrender well. I have passed a whole column, no one knows where they are going."

The soldiers laughed again, and the motorist continued up the road, where he passed a Russian tank that had also run out of fuel.

The original interchange may be seen here: 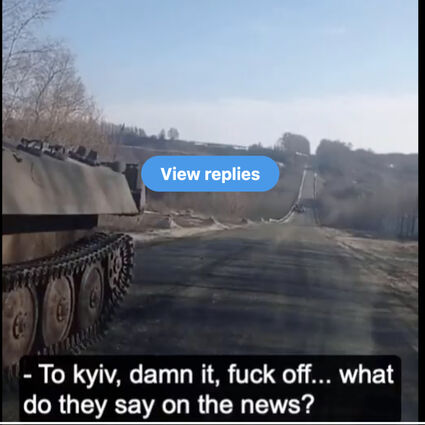 The video begs a question: Are Russian supply lines so stretched that they are unable to refuel military vehicles invading Ukraine?

"There has been some online discussion, from social media but also from @defenceHQ about Russian logistical problems. The reality is that in any large-scale advance by land forces, logistics is ALWAYS an issue. We train our combat forces to be aggressive in the advance and to exploit opportunities where they find them. Sometimes this means they outrun the logistic support of even the best military organizations. This will be part of why we are seeing armoured vehicles out of fuel, like this exchange." tweeted Major General Mick Ryan.