Cat in Ukraine Credited With Exposing 4 Russian Snipers by Chasing Down Laser Pointers.

Feline dubbed The "Panther of Kharkiv" chases down laser sights on Russian Sniper Rifles. Personally, I Want to Believe 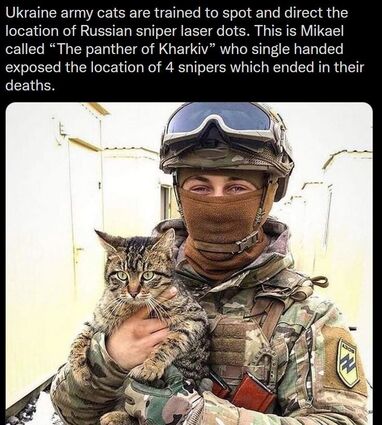 3/1/22: The Russian Army recently shelled residential areas of Kharkiv, Ukraine in their recent assault on that City. But a local cat has decided to change all that. The "Panther of Kharkiv" reveals the locations of Russian army snipers, by chasing down the red laser dots produced by their AK-47 rifles. Well at least that's the story. I certainly hope it's true.

The original post reads: Ukraine army cats are trained to spot and direct the location of Russian sniper laser dots. This is Mikael called "The panther of Kharkiv" who single handed exposed the location of 4 snipers which ended in their deaths. 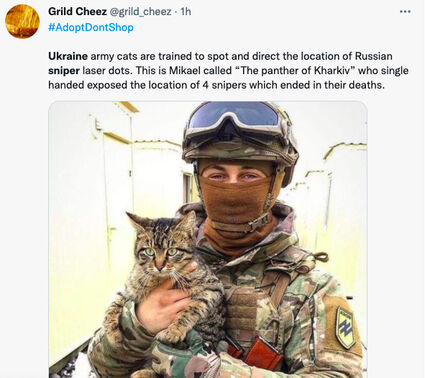 Comments from social media: "Ghost of Kyiv (mysterious ace pilot) is good," tweeted Matt Gallagher, referring to the now debunked Ghost of Kyiv story. "Panther of Kharkiv (house cat that narcs out Russian snipers) is very good. The Wolf of Odessa (golden retriever who swims underwater bombs to docked Russian ships) will be the I.O. campaign's masterwork, and personally I'm all for it"

'How dare anyone be dubious of the Panther of Kharkiv! I was dubious at first, but now I want to adopt him." Tweeted Nigel Peters.

'Hobbes is training hard and ready to help The Panther of Kharkiv. Calvin, on the other hand, is probably a Russian infiltrator," tweeted a woman named Katherine together with a short video of her two orange cats.

Cats as soldiers? Well they don't follow orders well. But on the other hand, they do have nine lives. So maybe it's not so impossible after all.