Ukrainian Pres. Zelensky Challenges Putin to Sit Down With Him Directly, and Talk

"It's not about I want to talk to Putin. I have to talk with Putin. Because there are no other ways to stop this war." -- Zelensky 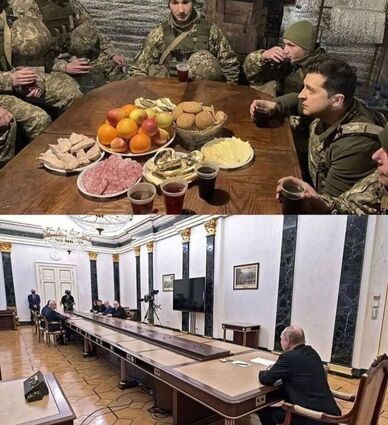 Zelensky pictured having lunch with his troops is contrasted with Putin seating visitors at the end of a long table, in this image making the rounds on Twitter.

3/3/22: For the first time since Russia's invasion of his country 8 days ago, Ukrainian President Volodomyr Zelensky addressed Vladimyr Putin directly. In a video released on social media, the Ukrainian leader told his Russian counterpart, let's sit down and talk, man to man. 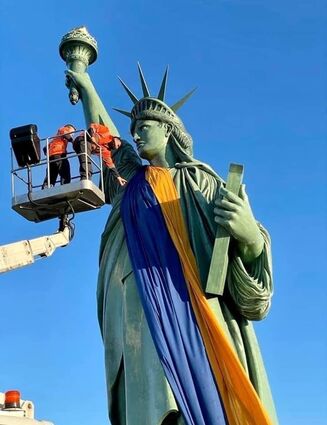 Workmen drape the Ukrainian flag across the shoulders of the Statue of Liberty in New York harbor.

"Good Lord, what do you want? Leave our land. If you don't want to leave now, sit down with me at the negotiating table. But not from 30 meters away, like with Macron and Scholz. Sit down with me and talk. What are you afraid of? We're no threat to anyone."

"It's not about I want to talk to Putin. I have to talk with Putin. Because there are no other ways to stop this war," Zelensky said later Thursday at a news conference.

Twitter is Zelensky's home court, and reaction was swift. "The 40 km convoy is actually trying to bring a table long enough to reach from Kyiv to Belarus so Putin can sit down to negotiate," wrote Vessa K, a Bulgarian.

"Zelenskyy is the leader every nation craves. He is a leader who bleeds from his heart and soul for his country and its people. We wake up each day searching for the news he is still alive and safe. He is a man who stands in the embrace of the world," tweeted Max C, an American.