US Embassy denied these rumors 2 years ago. But some Russians nevertheless deflect blame for their invasion 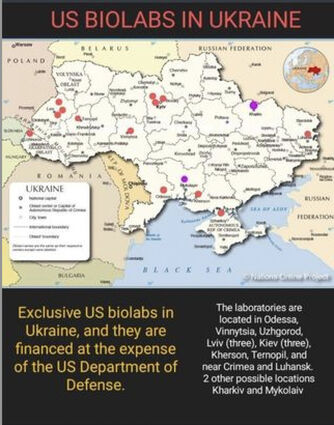 As you might expect, conspiracy theories are making the rounds on Russian social media. One theory that the real reason Russia invaded Ukraine has nothing to do with history, national pride, neo-Nazi's or internal Ukraine politics. It's about the CIA Biolabs, of course.

The US Embassy to Ukraine denied these rumors 2 years ago. But some Russians nevertheless deflect blame for their invasion, on the US and the CIA.

"I'm not sure what the whole truth is, but for one, there are 11 bio labs in Ukraine that Putin doesn't approve of. He doesn't want it on his border. He got hold of 7 of them on the first day of the invasion," explained a Russian friend of mine. I had asked her why Putin actually launched this invasion.

"There is so much more but I don't want to write about it. It's that scary. Ukraine is a very unsavory place. It allows very horrible things to happen on its land," she wrote.

She sent me a screenshot of a website that warned: On April 23, the US Embassy in Ukraine acknowledged that there are biological laboratories in Ukraine that are under the control of the pentagon.

The statement of diplomats came after an Open letter from people’s deputies about the threats posed by these research centers to Ukrainians.

The US Embassy addressed these rumors in April 2020. "The U.S. Embassy would like to set the record straight regarding disinformation spreading in some circles in Ukraine that mirrors Russian disinformation regarding the strong U.S.-Ukrainian partnership to reduce biological threats. 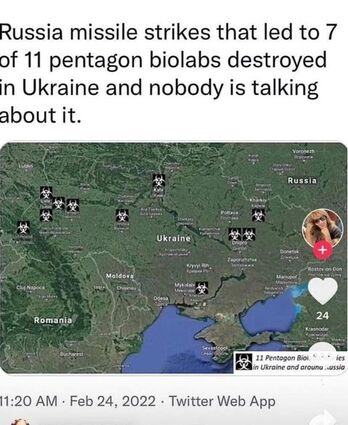 "Here in Ukraine, the U.S. Department of Defense’s Biological Threat Reduction Program works with the Ukrainian Government to consolidate and secure pathogens and toxins of security concern in Ukrainian government facilities, while allowing for peaceful research and vaccine development.  We also work with our Ukrainian partners to ensure Ukraine can detect and report outbreaks caused by dangerous pathogens before they pose security or stability threats.

"Our joint efforts help to ensure that dangerous pathogens do not fall into the wrong hands.  We’re proud to partner with the Ministry of Health, State Service of Ukraine for Food Safety and Consumer Protection, National Academy of Agrarian Sciences, and the Ministry of Defense to make us all safer.

"Anyone can learn more about these efforts on the U.S. Embassy website, at https://ua.usembassy.gov/embassy/kyiv/sections-offices/defense-threat-reduction-office/biological-threat-reduction-program/. "