In a Sudden About Face, Polish Foreign Ministry Agrees to Supply Ukraine with about 27 MIG-29 Sakoyan Fighter Jets

Ukraine had 98 fixed wing fighter jets two weeks ago. Russia began the war with 1257 jets. This will even it out somewhat. 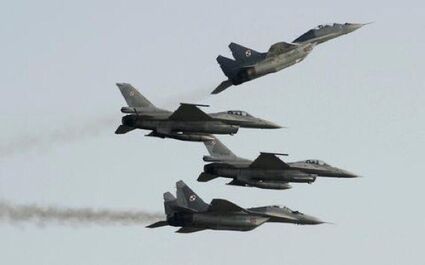 Update 3.8.22: The Pentagon was apparently sandbagged by Poland's announcement. Tuesday afternoon the US Defense Dept. called the Polish proposal was "untenable," which seems to kill the deal for now. “It is simply not clear to us that there is a substantive rationale for it,” Pentagon spokesperson John Kirby said. Hours prior, the Polish government announced its decision to supply the U.S. with its stockpile of MIG-29 jets, free of charge, to be later transferred to Ukraine.

In an unexpected announcement, the Polish Foreign Ministry tweeted that it will turn over about 27 MIG-29 jets owned by the Polish Airport, to Ukraine via the US. Poland had called the news that it was giving its MIGs to Ukraine "fake news" just 2 days ago.

Poland is "ready to deploy – immediately and free of charge – all their MIG-29 jets to the Rammstein Air Base and place them at the disposal of the USG. Poland requests the U.S. to provide us with used aircraft with corresponding operational capabilities." The statement from the Polish Foreign Ministry also said that Poland requested other NATO allies with MIG 29's to do the same. It also said that the US would replace Poland's MIG-29s with more modern fighters, probably F-18's.

Polish statement concerning the turn over of jets

Ukraine President Volodomyr Zelensky has repeatedly begged the West for more planes. The Ukraine Air Force, with 35,000 men, began the war with just 98 Russian built fighter aircraft. The Russian built MIG-29's would be especially useful to Ukraine because its pilots already know how to fly MIGs. Russia began the war with 1257 jets, though it's unclear how many were operational or brought into the Ukraine war theater.

The MIG 29 fighter is a third generation fighter jet built by Russia in the 1980's. Former Warsaw pact countries now in Nato, still operate a handful. Poland's airforce also has 48 US Built F-18 fighters, which are less than half as old, and are 4th generation planes. The fifth generation US built fighter jets, such as the F-35 and F-135, are extremely expensive.

"Poland calls now calls on other NATO members with Soviet era jets to do the same," said the statement. Bulgaria has 13 MiG-29s. Slovakia has 11 MiG 29s. Bulgaria also has 8 Sukhoi Su-25 attack aircraft.