In shades of Winston Churchill, Zelensky Addresses the British House of Commons Via Videolink 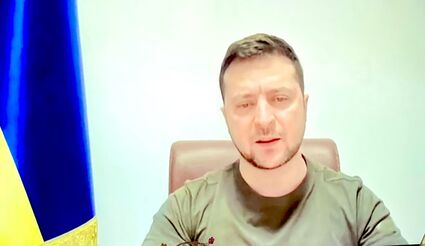 In shades of Winston Churchill, Zelensky Addresses the British House of Commons Via Videolink

Quoting Winston Churchill to the British Parliament, Zelensky said Ukraine "will not give up." He received a standing ovation from United Kingdom's House of Commons when he said, "we don't want to lose what we have, what is ours, our country, Ukraine."

Zelensky called for Russia to be named a "terrorist state" and for allies to "make sure our skies are safe. . . . we will not surrender, we will not lose, we will go to the end." 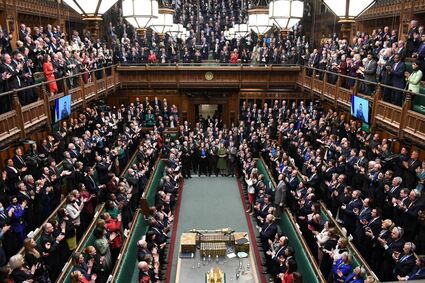 Prime Minister Boris Johnson said the leader had "moved the hearts of everybody" watching, and pledged to "press on with tightening the economic vice" around Russian President Vladimir Putin.

Labour leader Sir Keir Starmer also praised "the bravery [and] the resolve" of the president and his people, adding: "He has shown his strength and we must show him - and the Ukrainian people - our commitment and support."

"Because of Britain remaining democratic, free and militarily engaged from 1940 to 1945, the House of Commons is the only European parliament where Zelensky could have delivered a speech with such emotive historical overtones," said one commentator.

The charismatic Ukrainian President received a standing ovation from Members of Parliament as he becomes the first person to address the House of Commons via video.

The MPs then voted to ban Russian oil imports. They did not vote to send aircraft to Britain or to open Britain to Ukrainian refugees, however.