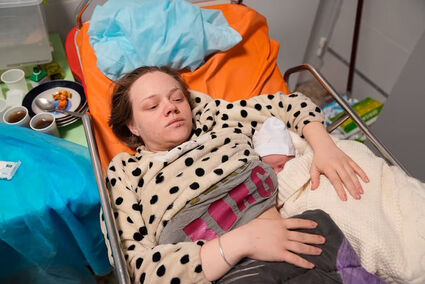 UPDATE 3/11/22: "I received an update from a relative of Marianna - a pregnant girl from Mariupol's bombed hospital. They were able to reach her on the phone briefly. Last night at 10pm, Marianna gave birth to a baby girl! They are ok, but it's very cold in Mariupol and the bombing doesn't stop." Olga Tokariuk tweeted.

"A smear campaign launched by Russia against Marianna, a pregnant woman from Mariupol's bombed hospital, is terrible. Not only Russian officials harass her, users from Russia write atrocious things on her Instagram page. These people are completely deprived of humanity," tweeted Olga Tokariuk. Tokariuk describes herself as a journalist and a disinformation specialist.

Some on Twitter doubted that it was individual Russians bullying Marianna. They suggested it was part of a Russian Disinformation campaign, by a beleaguered RU government.

"This type of hate trolling is very sophisticated!" tweets Julietyankee-06. "The resources and time put in is unusual, there is a clear and present coordinated program in creating these posts to smear the victims of the russian bombing of the Mariupol maternity hospital, we must id those post and report!"

"Why did they double down and focus on this one instance? They are getting desparate and don't have the resources to cover all the information out there, so they are just laser focusing on this onwn thing and will use an adhominem argument to say everything else is false, too." tweeted sitara68.

"Russians are bullying Marianna on Instagram. She is one of women from maternity hospital in Mariupol, shelled by the Russians. Her face appeared today in all the world media. If you can write words of support, it will be the right decision. We'll transfer your comments to her."

Today the #Russian officials and the propaganda personas denied the Massacre by saying that the wounded pregnant woman is an Instagram influencer! they started to talk about chemical- biological weapons in #Ukraine and bats! As a Syrian who worked in media I can tell that, We have witnessed the exacted same lying scenario when they Sieged #Eastern_Ghouta, #Aleppo and other areas, escalating in targeting civilians by bombing all schools and hospitals making massacres causing terror to force people to flee out of the urban areas through evacuation routes that they agree on via negotiations.. this is how Mr. Bat Lavrov understands diplomacy... and that how #Putin'Z propaganda machine is participation in the war crime. banning Russia today and the other criminal media is not enough." tweeted @Elhajisy, an Arab jouralist.

"let's look at the facts, one at a time," tweeted Shayan Sardarizadeh, an British born, Iranian ancestry journalist who writes for the BBC. "After yesterday's deadly attack on a Mariupol maternity hospital, a false claim began trending on Russian Telegram that a non-preganant crisis actor played the role of two pregnant women there. It was echoed by the Russian embassy in UK today." 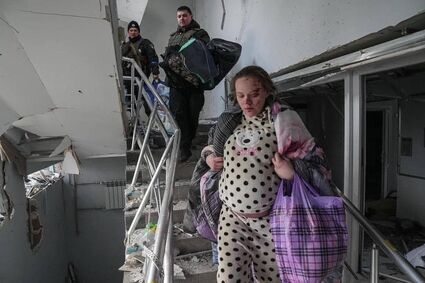 "Marianna Podgurskaya, the woman they claim to be a crisis actor, is indeed a beauty influencer who actually lives in Mariupol. Multiple recent images show she's heavily preganant, which is why she'd be at a maternity hospital yesterday."

Twitter removed Russian government tweets alleging that the incident was staged and Podgurskaya was a fake victim. A Twitter spokesperson said the company took enforcement action against the tweets "because they violated Twitter's policies, in particular the hateful and offensive behavior policy associated with the denial of violent events."