White House: Russia is Setting up to use Biological or Chemical Weapons in Ukraine, then Blame US, Ukraine

US State Dept. today denied in a tweet that the United States had any biological weapons labs in Ukraine. 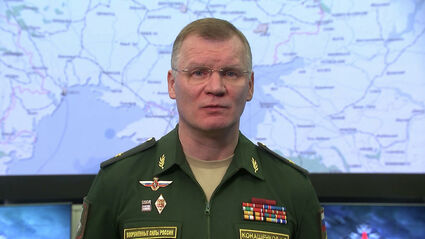 It's directly from the Kremlin's playbook in Syria. Blame the victim, then use chemical weapons on them.

"#Konashenkov: 🇺🇦nationalists delivered about 80 tons of ammonia to Zolochiv settlement near #Kharkov. Residents from there say nationalists teached them how to act in a #chemical attack. Nationalists planning a provocation with toxins to accuse #Russia of using chemical weapons." This is a tweet from the Russian defense ministry, in English.

Britain and the US say Russia is setting the stage to use a chemical weapon in Ukraine after Kremlin officials alleged without firm evidence that the US had been supporting a bioweapons program in Ukaine. This is an old liable that the Russians spread before their invasion.

White House press secretary Jen Psaki said Wednesday that Russia had recently made "false claims about alleged US biological weapons labs and chemical weapons development in Ukraine", and added that the allegations had been echoed in Beijing. 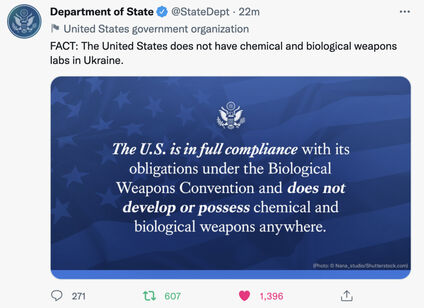 US State Dept. today denied in a tweet that the United States had any biological weapons labs in Ukraine.

"Now that Russia has made these false claims, and China has seemingly endorsed this propaganda, we should all be on the lookout for Russia to possibly use chemical or biological weapons in Ukraine, or to create a false flag operation using them," she tweeted.

Republicans agree. "I have mentioned this every day for a week for a reason," tweeted Marco Rubio. "Russia is doing everything it has done in the past when they have set up a biological or chemical false flag"