'I have landed over 22,000 sturgeon on my fishing charters and this was one I'll never forget,' Bisson said.

A 10-foot sturgeon believed to be between 500 and 600 lbs was caught, tagged, and re-released by a fishing guide in British Columbia. Guide Yves Bisson estimates the fish could've been more than 100 years old.

'I have landed over 22,000 sturgeon on my fishing charters and this was one I'll never forget,' Bisson said. 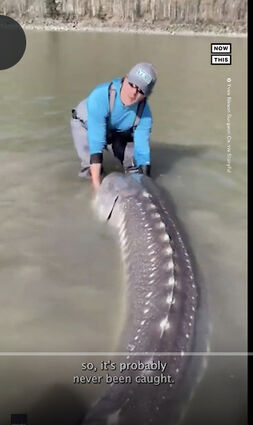 "He's going to go back and tell all the other sturgeons how he was abducted by aliens, and experimented on. None of the others will believe him." wrote Edofloortrades on Twitter.

"There are quite a few species that live for insanely long times. Some species of rockfish have similar lifespans (80-120 years), we don't even know how long some deep sea fish live, and Greenland sharks can live for literal centuries," tweeted Well of Good Fortune.

Sturgeon is the common name for 17 fish species, says wikipedia. Both sturgeons and paddlefish have been referred to as "primitive fishes" because their morphological characteristics have remained relatively unchanged since the earliest fossil record. Sturgeons are native to subtropical, temperate and sub-Arctic rivers, lakes and coastlines of Eurasia and North America.