While doubtlessly some were there to support the war, others said they were forced to attend, and didn't want to be photographed.

3.18.22: Moscow held a rally today to support its armed forces in Ukraine. The stadium which holds 81,000 people was pretty much filled to capacity. The authorities said that 200,000 people supported the rally.

Below is a long quote from Will Vernon, a journalist for the BBC, who attended the rally.

This is the picture the Kremlin wants you to see: thousands of people who support President Putin and the "special military operation" in Ukraine, crammed into Luzhniki Stadium in Moscow. We went there today and talked to dozens of people who attended... 🧵

"There were doubtless some people in attendance who genuinely support President Putin and the "special military operation in Ukraine", as the Kremlin prefers to call it," wrote Will Vernon on Twitter

Many said they worked in the public sector (e.g. schoolteachers), and that they had been pressured into attending by their employers. One group of teachers, from a town near Moscow, were being told what to say to us by a woman who appeared to be from the local administration.

One man, who works in the Moscow metro, told us that he and other employees had been forced to attend the rally. "I'll be here for a while and then I'll leave... I think most people here don't support the war. I don't," he said.

In comparison to opposition rallies, most people didn't want to talk, be filmed or answer any questions. Some would cover their faces or put up their hoods when we said we are journalists. Many seemed embarrassed or ashamed to be there.

Students told us they had been given the option of a day off from lectures if they attended 'a concert.' Some of them didn't even know that the event was dedicated, in part, to support for Russian forces in Ukraine."

March 18 (Reuters) - The Kremlin said on Friday a technical glitch was behind the interrupted transmission of Russian President Vladimir Putin's speech to a packed Moscow stadium to mark the eighth anniversary of Crimea's annexation.

Russian state television suddenly cut away from Putin hailing what Russia calls its special operation in Ukraine and the bravery of its soldiers, to show patriotic songs being played at the event instead.

It later aired the full speech, which ended a few seconds after the cutaway with Putin leaving the stage as thousands of spectators waved Russian flags at the 80,000-capacity Luzhniki stadium.

Russia sent tens of thousands of troops into Ukraine on Feb. 24 in an effort to degrade its southern neighbour’s military capabilities and root out people it called dangerous nationalists.

Before Putin spoke, Russia's stirring national anthem, with the words "Russia is our sacred state" boomed out across the stands of the stadium used in the 2018 Soccer World Cup along with more modern pop hits such as "Made in the U.S.S.R.".

Putin's favourite Russian band, Lyube, sang patriotic songs about war, sacrifice and the honour of those fighting for Russia. 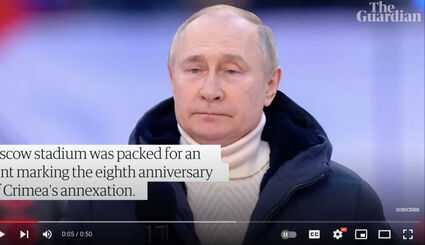 Putin at rally in Luzhniki stadium

Pan-Slavist poetry by Fyodor Tyutchev, whose verses warned Russians that they would always be considered slaves of the Enlightenment by Europeans, was read out.

Russia has lost any illusions about ever relying on the West and Moscow will never accept a world order dominated by the United States which is acting like a sheriff seeking to call all the shots in a saloon bar, Foreign Minister Sergei Lavrov said. read more