Actor and former California governor Arnold Schwarzenegger released a video on Social media and to youtube.com, where he speaks directly to Russian soldiers in Ukraine, telling them the truth about their invasion.

"I'm sending you this video because things are being kept from you," said the actor, who is from Austria. "Terrible things, that you should know about. But first, let me tell you about my Russian friend that I met when I was 14 years old."

He then recounted a backstage meeting a Russian weighlifter, Petrovich Vlasov, who was the first man in the world to lift more than 200 Kilograms (about 440 lbs).

He said that Vlasov “had this powerful man’s hand that swallowed mine. But he was kind, and he smiled at me. I will never forget that day.”

"I went home and put Vlasov’s picture above his bed to inspire him when he started lifting weights. His father, though, told him to take it down and put up one of a German or Austrian hero."

“He got really angry, and we argued back and forth,” Schwarzenegger said, noting that his father served the Nazi's and was injured during World War II in Leningrad. The Nazi Army, he noted, “did vicious harm to the great city and to its brave people.”

Schwarzenegger said he didn’t take the photo down “because it didn’t matter to me what flag Yuri Vlasov carried.” 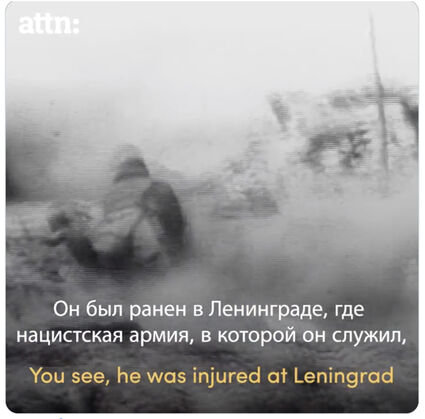 He said that he met Vlasov again, this time when he was in Moscow to film Red Heat, the first American film allowed to shoot in Red Square. They spent the day together and “he was so thoughtful and so kind and so smart,” and gave him a blue coffee cup.

Schwarzenegger said that his point was that since he was 14, he has had “nothing but affection and respect for the people of Russia.”

But he said that he wanted to speak up in the same way he did after January 6th of last year, when rioters sacked the U.S. Capitol.

“I know that your government has told you that this is a war to denazify Ukraine. Denazify Ukraine? This is not true. Ukraine is a country with a Jewish president, a Jewish president I might add whose father’s three brothers were all murdered by the Nazis. You see, Ukraine did not start this war. Neither did nationalists or Nazis. Those in power in the Kremlin started this war. This is not the Russian people’s war.”