Security camera footage showed the apparent missile strike lighting up the Kyiv sky. Residents heard a loud explosion all through the City. 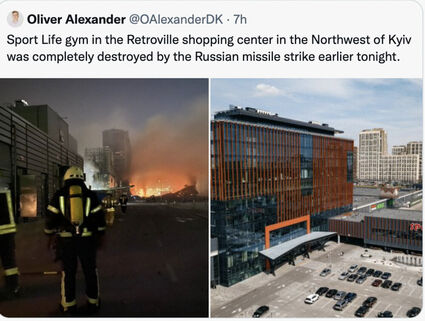 Sport Life gym in the Retroville shopping center in the Northwest of Kyiv was completely destroyed by the Russian missile strike 3.21.22.

Update 3/21/22: Shelling hit residential houses and a shopping district in Kyiv's Podil district late on Sunday, killing at least eight people, city authorities said. "According to the information we have at the moment, several homes and one of the shopping centers [were hit]," city mayor Vitali Klitschko said on his Telegram channel. He said rescue teams were putting out a large fire at the shopping centre, while other details are still to be confirmed. The Kyiv department of the state emergency service said four people had been killed..

A closed camera TV footage at the mall shows the blast and a rain of fire, after a Russian Iskander missile hit a suburban mall near Kyiv. https://twitter.com/aldin_ww/status/1505660843085684738?s=20&t=Wt20X6c8cUDuKMFOfaLl_g 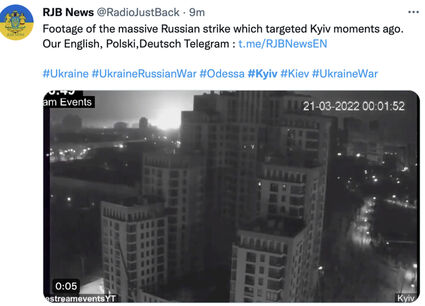 Russian Iskander missile hit which lit up the sky on March 21 in Kyiv.

"Retroville shopping center is on fire as a result of missile strike on Kyiv tonight." tweeted one local resident.

Security camera footage showed the apparent missile strike lighting up the Kyiv sky. Residents heard a loud explosion all through the City. The Russians have taken to using medium range missiles more and more, despite the relative expense, because they appear to be out of ordnance for regular artillery.

Separately, the Russian defense ministry gave civilians and Ukraine soldiers until 5 am Monday morning to leave Mariupol, which they have now been beseiging for over 3 weeks. They then intend to enter the city and kill anyone in sight. It is unknown of course whether they will honor their pledge to allow survivors to leave.