A Russian news website connected to the government briefly posted, then took down an article admitting to massive Russian casualties in Ukraine 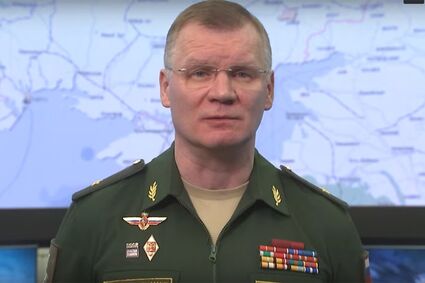 Igor Konashenkov , official representative of the Ministry of Defense of the Russian Federation, spoke about this at a briefing .

A Russian website briefly posted, then took down an article based on a briefing by the spokesman for the Russian Ministry of Defense, who admitted to massive Russian casualties in Ukraine. 25 days into the operation, 9,861 Russian soldiers have died fighting the Ukraine army, while 16,153 have been wounded. "the RF Armed Forces have lost 96 aircraft, 118 helicopters and 14.7 thousand military personnel."

The 14,700 figure appears to include POWs and deserters. In comparison, about 5000 US Servicemen were killed in our just concluded 20 year war in Afghanistan. These are staggering numbers, considering that there were never more than about 160,000 Russian servicemen in Ukraine.

The Russian newspaper now claims it was hacked. See photo below. A week into the war, Russia admitted to 498 KIA, but have not updated this figure since then.

Komsomolskaya Pravda is a daily Russian tabloid newspaper, founded on in 1925. It was owned by the Communist Party until the 1992 Collapse of the Soviet Union. The paper is owned by Media Partner, which in turn is owned by ESN Group (Евросевернефть), an energy company led by Grigory Berezkin, who has close links to Gazprom. In December 2000 the Norwegian media company A-Pressen bought 25 percent plus one share of the paper.

"Units of the Russian Armed Forces are completing the defeat of the nationalist 'Donbass battalion' ," Konashenkov said, adding that during the day the Russian armed forces advanced 12 kilometers and, together with the units of the DPR, blocked the settlement of Sladkoe from three sides.

"Now there is a battle for the capture of the settlements of Sladkoe, Novoukrainka and Shakhtyorskoye with the remnants of militants and units of the 54th separate mechanized brigade of Ukrainian troops," Konashenkov said. 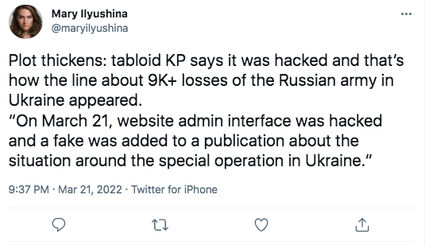 According to the official representative of the Ministry of Defense, on Sunday, March 20, 89 Ukrainian military facilities were hit, including command posts, installations of multiple launch rocket systems, artillery weapons, weapons and ammunition depots, and places where military equipment was concentrated, seven Ukrainian drones were shot down in the air.

According to preliminary estimates of the General Staff of the Armed Forces of Ukraine, from the beginning of the special military operation in Ukraine to March 20, the RF Armed Forces have lost 96 aircraft, 118 helicopters and 14.7 thousand military personnel.