Why would a soldier bring condoms into a battlefield? Unless rape is being used as an instrument of warfare. 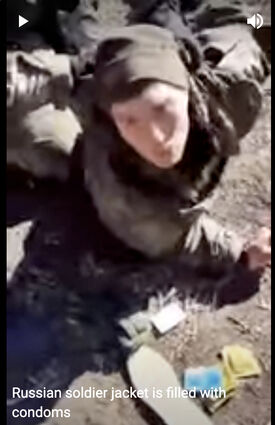 While capturing a Russian soldier, Ukrainian soldiers make him turn his pockets inside out, revealing a number of condoms.

Members of Ukraine's parliament have accused Russian soldiers of raping Ukrainian women, including civilians. There have been a series of rape claims levied against Kremlin troops by Ukrainian refugees and government officials alike since the invasion began, with Ukraine's foreign minister Dmytro Kuleba and opposition MP Lesia Vasylenko both citing reports of Russian soldiers sexually abusing helpless civilians.

In a video posted to youtube on 3.23.22, Ukrainian army unit captures a Russian soldier named Dmitrii Alekseevich Paramoshkin. His pocket's are turned inside out, to reveal about ten condoms in his pocket. Why would a soldier bring condoms into a battlefield? Unless he intended to abuse civilians, Ukrainian soldiers who captured him said.

While capturing a Russian soldier, Ukrainian soldiers make him turn his pockets inside out, revealing about ten condoms.

On March 23rd, the Ukrainian prosecutor General said that a Russian soldier had killed man, rapes wife in Kyiv Oblast. In a village in the Brovarskyi district of Kyiv Oblast, a Russian soldier murdered a man and then, along with another soldier, repeatedly raped his wife, according to Prosecutor General Iryna Venediktova. One of the men was identified, the report said, and is now wanted by Ukrainian military authorities.

Anastasia Taran, a 30-year-old from Enerhodar employed as a waitress in Irpin prior to the Russian invasion, claimed that conditions in the Russian-occupied town are like 'hell' and alleged the invaders engaged in horrific treatment of locals.

'Irpin is Hell. There are plenty of Russian soldiers out there who just shoot people who enter private homes and, at best, just kick people out of their homes,' Anastasia told Ukrainian outlet Euromaidan Press. 'They rape women and the dead are just being dumped.'