"The Mayor just let people be touched in front of him. I never saw a negative reaction from Mayor Garcetti. It was so, so inappropriate." 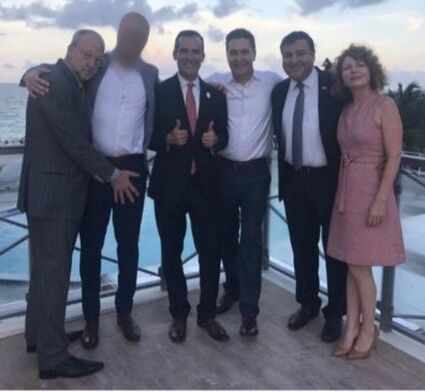 Los Angeles Mayor Eric Garcetti was nominated as US Ambassador to India six months ago, but his appointment has been held up by the Jacobs Affair.

Naomi Seligman is LA Mayor Eric Garcetti's former communications director. The Mayor has testified that he never witnessed any inappropriate behavior from Rick Jacobs, the Mayor's Chief of Staff. Seligman, appearing on the John Phillips show on KABC, says otherwise.

"Rick Jacobs would comment on people's body parts in very graphic details. He would get people to shake his hand, and then pull you in, and not let you go. And you watch him do it as the Mayor was just inches away.

"The Major just let people be touched in front of him. I never saw a negative reaction from Mayor Garcetti. It was so, so inappropriate. He just sat there like we were having a cup of coffee. What I heard over and over again from others in the office was, put up with it, this is his boy Rick. He did not react or try to intervene

"We do know of one time when the Mayor tried to intervene. The Mayor's counsel was in the elevator in the building. In that elevator were about 5 or 6 people, rick Jacobs, and the major. "And we know that Rick Jacobs was in that elevator, and he was basically dry humping (there's no other way to say it) her while she said stop it, and finally the Mayor said "cut it out!"

"We know this happened because Naomi testified to it during his ongoing deposition. And I know about it because Naomi closed the door and told me about what he had done to her. And she was really on the brink of tears

"And we know the Mayor saw it, in the US Senate building. And the Mayor said there was zero tolerance, we know it's not true, because people said it isn't.

"The Mayor has testified under oath, in court and in Senate Confirmation hearings, that he was never aware of anyone being sexually harassed on his staff.

"We know that the mayor was aware of these activities."

"The LA Times had a graphic picture of the mayor with 2 thumbs up, with Jacobs hand in front of another man's genitalia. He was no longer under consideration for Secretary of Transportation after the photo came out. 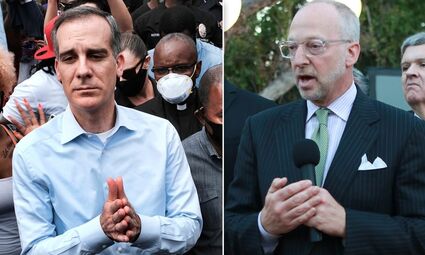 Eric Garcetti and Rick Jacobs, his chief of staff

"I think what is painful for victims and witnesses is that we have on the one hand, the White house urging Gov Cuomo to resign, and then on the other hand nominating someone who tolerated a predator to be nominated.

"I think it's very important they should be informed. There are half a dozen people who in testimony have talked about what happened, and what the mayor knew and when he knew it. And to just take the mayor at his word, is not appropriate."

Phillips thanked Seligman and said that Garcetti was in line for a pass, until Seligman spoke up.