Report from the Ukraine Interior Ministry that the Kerch bridge Leading From Ukraine to Russia, has been Blocked. 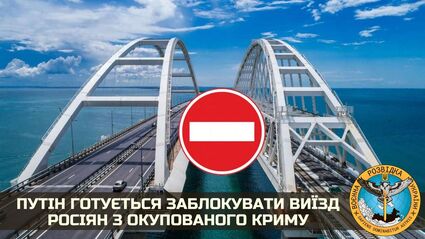 According to Ukraine government, Putin will block the only exit from Crimea to Russia

Imagine the Ukraine army not only pushing Russia back from recently occupied areas, but from the areas it took from Ukraine in 2014. It's a worst case scenario for Russian military planners.

According to the Ukraine government, Russians in Crimea realize their military is in complete collapse, and they're trying to get out of town before the worst case possibility comes to pass. "Russia is preparing to block Russians from leaving occupied Crimea," tweeted Euromaidan Press. "According to 🇺🇦 Intel, 🇷🇺 Nat'l Guard prepares to block Kerch bridge, ferry & air connection. Since 24 Feb, panic is rising in Crimea, 🇷🇺 military, occupation administrations try to leave." The Kerch Bridge is the only way to travel from Crimea to Russia, without passing through Ukraine territory.

When Russia marched into Ukraine in 2014, a Russian friend of mine explained to me that "Crimea is a special case. The people living in Sebastopol, are mostly Russian, many connected to the Soviet military prior to 1991. The Black Sea Fleet is headquartered there. If Crimea were to vote, 80% would want to be in Russia, not Ukraine. etc." Admittedly that may be true.

About the geography of Crimea: The peninsula is attached to Russia, but barely, over one bridge flowing East called the Kerch Bridge. Water and power comes from Ukraine, which ruled Crimea from the 1992 dissolution of the Soviet Union until 2014 when the Russian armed forces rolled into the peninsula.

▪️ The formal reason for such actions is the fight against Ukrainian partisans and prevention of possible "terrorist attacks".

The Kerch Bridge is the only way to travel from Crimea to Russia, without passing through Ukraine territory.

▪️ Thus Putin's authorities are trying to react to panic moods among Russian citizens who illegally moved to Ukrainian Crimea after February 2014. The occupants seek to stop the flow of refugees from the peninsula. During the last weeks, after the February invasion of the Russian army into Ukraine, the trend towards the withdrawal of Russian citizens from Crimea. At the same time, in the first rows of "refugees" are members of the families of Russian officers, law enforcement officers and representatives of the occupation administration of Sevastopol. They urgently sell real estate, change residence registration, remove business and assets from the peninsula.

▪️Limiting the possibility of leaving Crimea, Putin actually holds 600 thousand Russian citizens hostage, who are now illegally on the peninsula and begin to understand the uncertainty of their legal status.