Oleg Gazmanov sang the following: "Ukraine and Crimea, Belarus and Moldova, that is my country."

Russia's expansion plans may have been revealed in a song. In a clip that is circulating widely on social media, a Russian singer seemed to indicate that Putin plans to incorporate Ukraine and Moldova into Russia. 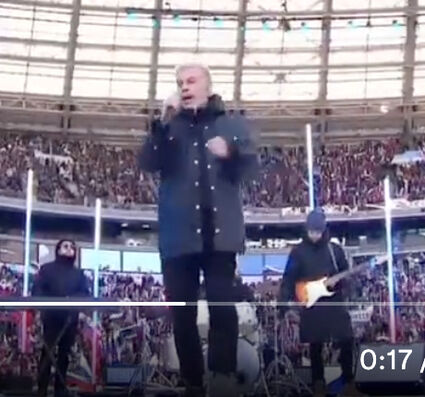 From twitter: "Kremlin's favorite singer Oleg Gazmanov at the pro-war rally Putin attended on March 19th, sang the following: "Ukraine and Crimea, Belarus and Moldova, that is my country." This clip was sent to me by an acquaintance in Chișinău where it's being shared with increasing alarm."

Chișinău or Kishinev, is the capital of Moldova. Both Ukraine and Moldova were provinces in the Soviet Union, which broke up in 1992.

81,000 people attended the rally in Moscow's soccer stadium. Another 120,000 attended the rally outside the stadium. Russian President Vladimir Putin himself addressed the crowd. Some attendees told a BBC reporter that they had been given the day off from work in exchange for their attendance. They had been told they were going to a concert.

One woman even told the BBC reporter, that she was against the war and embarrassed to be interviewed by a reporter at the concert.