Oscars include a moment of silence for Ukraine, Rather Than an Appeal by Zelensky.

"We ask you to support Ukraine in any way you are able," read the third. "#StandWithUkraine." 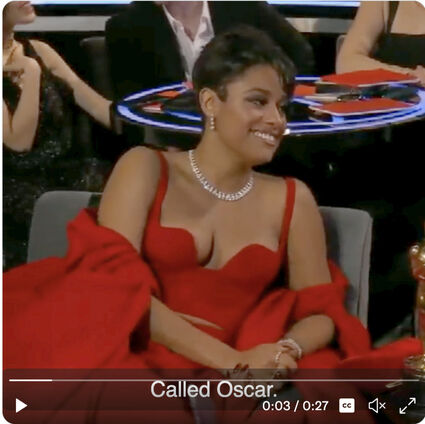 Ariana Debose won an award for West side story.

3.27.22: Tonight's Academy Awards ceremony included a moment of silence for Ukraine. Aides for President Volodymyr Zelensky of Ukraine had proposed a last-minute slot at the Academy Awards Sunday night, but the producers decided that would be too overtly political.

A week ago, says the New York Times, a push for backing Ukraine during the Oscars began when Kunis, an actress of Ukrainian origin, and her husband, actor Ashton Kutcher, spoke on a video call with Ukrainian President Volodymyr Zelensky, who was in Kyiv. (Zelensky wanted to thank the couple for raising $35 million in a GoFundMe campaign for Ukrainian refugees and humanitarian aid.)

After that video call, Zelensky's aides lobbied the academy for a last-minute slot at the Oscar ceremony. 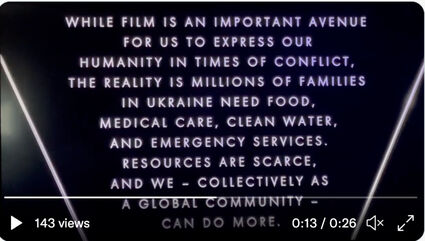 Oscars include a moment of silence for Ukraine

The show's producers, however, decided to go in a different direction, by including three cards of gold text on black backgrounds after McEntire's performance.

"We'd like to have a moment of silence to show our support for the people of Ukraine currently facing invasion, conflict and prejudice within their own borders," read the first card.

"While film is an important avenue for us to express our humanity in times of conflict, the reality is millions of families in Ukraine need food, medical care, clean water and emergency services," read the second. "Resources are scarce, and we - collectively and as a global community - can do more."

"We ask you to support Ukraine in any way you are able," read the third. "#StandWithUkraine."