The Undead: James Vasquez, U.S. Soldier Volunteering in Ukraine, Falsely Reported Dead Not Once, but Twice

"I got killed again☹️" Vasquez tweeted the afternoon of Thursday March 31, 2022. Proving 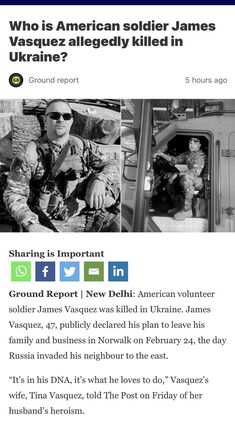 Even Mark Twain was only mis-reported dead once. James Vasquez, an American volunteering with the Ukraine Army, has now been reported dead not once but twice. "Ground Report," a blog intended as a compendium of war stories, reported on March 30th that Vasquez had died.

"I got killed again☹️" Vasquez tweeted the afternoon of Thursday March 31, 2022 alongside a screenshot of the false report. Proving of course, that he was alive. Or tweeting from the afterlife.

The incorrect story: Ground Report | New Delhi: American volunteer soldier James Vasquez was killed in Ukraine. James Vasquez, 47, publicly declared his plan to leave his family and business in Norwalk on February 24, the day Russia invaded his neighbour to the east.

“It’s in his DNA, it’s what he loves to do,” Vasquez’s wife, Tina Vasquez, told The Post on Friday of her husband’s heroism.

The former US Army Staff Sergeant finally arrived in Ukraine on March 15, sharing his experiences via a newly created Twitter account, detailing how he helped “take out” numerous Russian tanks, as well as kill and capture Russian troops. https://groundreport.in/who-is-american-mercenary-soldier-james-vasquez-allegedly-killed-in-ukraine/

"No 4G. 3G when I’m lucky," he added answering a question about cellular service in Ukraine. The implication was that maybe he went off grid, hence the false report.

"For all the news and social media, please refrain from posting false information.....Unless you have a body, do not post untruths....Have some respect for me, his wife. You could only imagine how I feel seeing this online." tweeted his wife, Tina Vasquez.

To be fair to Ground Report, an English and Hindi website based in India; battlefields are confusing places. Incorrect reports of death and other facts are hardly uncommon.

About 20,000 foreign volunteers are believed to be serving in Ukraine. Russia invaded Ukraine on February 24th, earning almost universal condemnation from Western countries.