Russians rounded up military age men in a town of 28,000 and shot them in the streets. 7,000 of the towns men were in that age group. 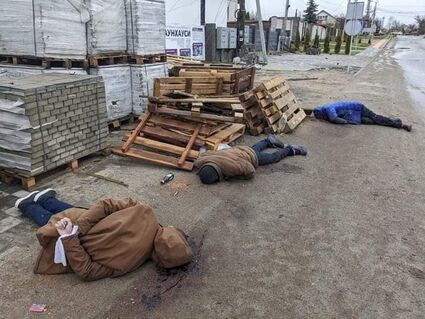 "In #Bucha 🇺🇦, liberated from the #Russians, there are many civilians killed. Especially men - hands tied, shot in the head." tweeted "This is Ukraine."

4.2.22: Reports from several sources say that Russia has committed unspeakable war crimes, unprecedented in modern Europe, during its occupation of Kyiv's Northern suburbs.

In a Ukrainian town called Bucha, the Russian Armed Forces methodically murdered all men between the ages of 16 and 60. This is the town seen on American news shows Friday night April 1st. A video shows a car driving through Bucha's streets showing corpses lying on the ground.

It should be emphasized at this time, that no one has confirmed the number of dead. But if the reports are true, Russia has committed the kind of war crimes that have not been seen in Europe since World War II eighty years ago.

The killing appears to extend beyond Bucha. "Russians are shooting civilians after tying their hands behind their backs. Dead bodies are all over the Kyiv oblast, on the streets, in cars, in people’s yards. Mass graves are full of unidentified bodies. Many families will never know what happened to their loved ones," tweeted Anastasia Lapatina, a well known journalist who writes for the Kyiv Independent, Ukraine's largest English language daily.

"This is just unbelievable," tweeted Illia Ponomarenko, who also writes for the Kyiv Independent, and is embedded with the Ukrainian Army. "Russian troops have left scores of firearms, vehicles, dead bodies, documents behind their backs as they were escaping the Kyiv region. Lots of washing machines, toys, kitchen appliances, fry pans looted. [email protected] FRY PANS. Looted as trophies."

"In just-liberated Bucha northwest of Kyiv, a mass grave of nearly 280 civilians," continued Ponomarenko. "Scores of civilians executed by the Russian military. Russia literally unfolded a killing spree in its occupied territories in Ukraine. The year is 2022."

"#Ukrainian soldiers who liberated #Bucha near #Kyiv from #Russia's invaders report numerous civilians shot dead.#Russians killed them during occupation and when retreated from the town. Some of victims have their hands tied.Innocent victims.They didn't deserve that." tweeted Emine Dzheppar, First Deputy Foreign Minister of Ukraine.

A New York Times reporter named Ivor Prickett filed a report from Bucha. He reported executions of civilians, but did not confirm overall numbers. "Reporters counted six bodies of civilians on the streets and sidewalks of Bucha. It was unclear under what circumstances they had died, but the discarded packaging of a Russian military ration was lying beside one man who had been shot in the head." https://www.nytimes.com/2022/04/02/world/europe/ukraine-russia-kyiv.html

Bucha had a pre war population of 28,000. By demographics, the town would have had about 7,000 men in that age group. 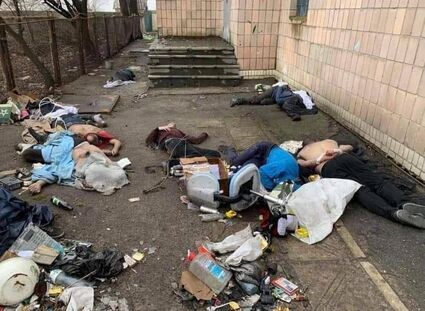 The Russian government announced on March 30th that it would withdraw its forces from North of Kyiv and its suburbs, to re-focus on strategic goals in Eastern Ukraine.