Five black and white units blocked off the entry to the Fairmont Hotel at Ocean and Wilshire Blvd. 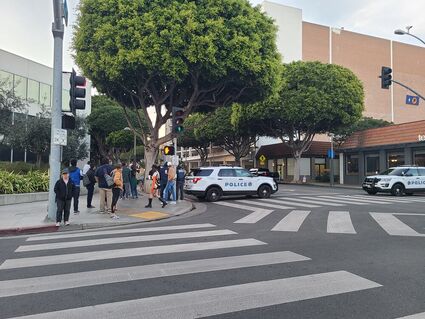 3.30: Santa Monica Police and Fire Department Paramedics were operating on 2nd Street Wednesday afternoon, as an unidentified individual threatened to jump off of Parking Structure 2. They were seen deploying jump cushions in front of, and in alleyway behind the structure.

Five black and white units blocked off the entry to the Fairmont Hotel at Ocean and Wilshire Blvd. 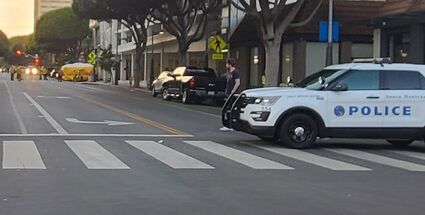 "Santa Monica Police & Fire Dept Activity" SMPD tweeted at 6 pm. "2nd Street is Closed between Wilshire and Santa Monica Blvd until further notice. Use alternative routes. The Crisis Negotiations Team is on scene and attempting contact with a distraught individual." At 10 pm, they tweeted that the street blockades had been removed. "The individual has been transported to a local hospital for evaluation."

In recent years, Santa Monica's taller parking structures have attracted a rather high number of suicidal people. Some, though not all, are people experiencing homelessness.

The National Suicide Prevention Lifeline is a United States-based suicide prevention network of over 160 crisis centers that provides 24/7 service via a toll-free hotline with the number 1-800-273-8255. It is available to anyone in suicidal crisis or emotional distress

This occurred at parking structure 2. Leave it to The Observer to always get their facts wrong. Look at a map of downtown. That might be helpful.