"All Ukrainians who have taken up arms must be eliminated - because they are responsible for the genocide of the Russian people...." 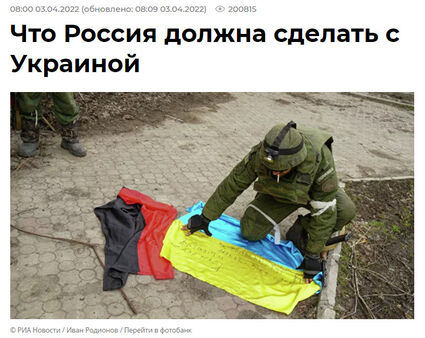 A jaw dropping piece was published this weekend by @RIANovosti. It's entitled "What Russia Should Do With Ukraine," and calls for the country's complete eradication.

One of the more astonishing aspects of Russia's actions in Ukraine is that Russia has not been subtle or shy about proclaiming hatred for all things Ukraine. A recent piece equates Ukrainians with Nazis, and says they should no longer have national identity. The author is Timofey Sergeytsev, a well known Russian political theorist.

"Yesterday, RIA Novosti published a lengthy article entitled "What Russia should do with Ukraine", which explains in detail what Russia understands by denazification. It's truly horrific," writes Belarusian journalist Tadeusz Giczan. He wrote the summary below. A link to the RIA Novosti article is at the bottom of the page. Note the irony here; that this piece was posted on April 3rd, the very day that Russia's ethnic cleansing of Bucha became clear to the world. Here's Giczan's summary:

1. The special operation revealed that not only the political leadership in Ukraine is Nazi, but also the majority of the population. All Ukrainians who have taken up arms must be eliminated - because they are responsible for the genocide of the Russian people.

2. Ukrainians disguise their Nazism by calling it a "desire for independence" and a "European way of development". Ukraine doesn't have a Nazi party, a Führer or racial laws, but because of its flexibility, Ukrainian Nazism is far more dangerous to the world than Hitler's Nazism

3. Denazification means de-Ukrainianisation. Ukrainians are an artificial anti-Russian construct. They should no longer have a national identity. Denazification of Ukraine also means its inevitable de-Europeanisation. 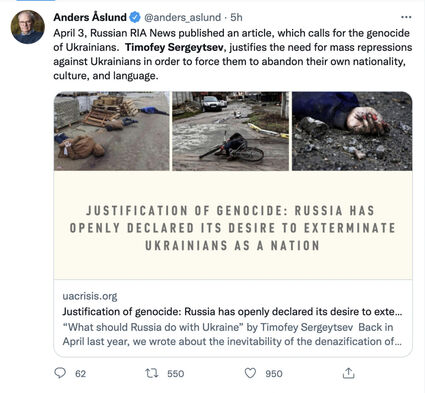 A jaw dropping piece was published this weekend by @RIANovosti. It's entitled "What Russia Should Do With Ukraine," and calls for ethnic cleansing in Ukraine.

4. Ukraine's political elite must be eliminated as it cannot be re-educated. Ordinary Ukrainians must experience all the horrors of war and absorb the experience as a historical lesson and atonement for their guilt.

5. The liberated and denazified territory of the Ukrainian state should no longer be called Ukraine. Denazification should last at least one generation - 25 years. Then the author goes on to detail exactly what needs to be done: https://ria.ru/20220403/ukraina-1781469605.html

RIA Novosti is a state owned news agency, dating back to 1941.

"That notorious RIA Novosti article has been translated in full into English. As naked an endorsement of genocide as you'll read in a state-owned media organ." tweeted Michael Weiss.

The link to the English translation is at: https://medium.com/@kravchenko_mm/what-should-russia-do-with-ukraine-translation-of-a-propaganda-article-by-a-russian-journalist-a3e92e3cb64