City workers say such assaults are not unusual 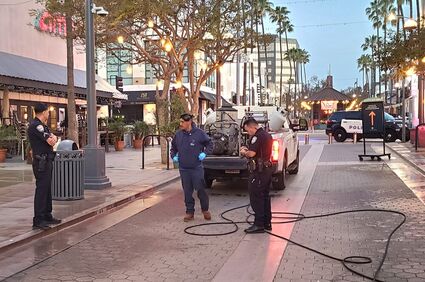 April 5, 2022 - This morning Santa Monica Police arrested and detained a homeless man who attacked a city maintenance worker on the Third Street Promenade. 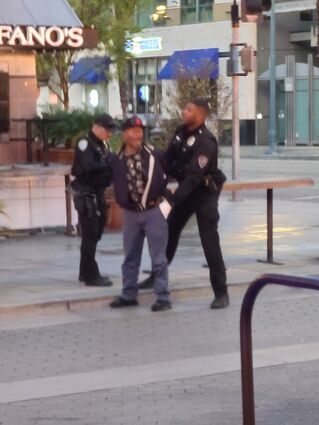 Suspect handcuffed by police following his assault of a city worker

A witness says a homeless male confronted a long-time city employee, Jose, who was driving the street cleaning service truck. He physically attacked Jose, who later claimed to be unhurt. Police arrived and were able to detain the attacker. He was handcuffed and driven away. Since no serious bodily harm occurred in the assault, it is unlikely he will be charged or held.

The witness says the regular maintenance workers, Jose and Robert, say such assaults are not unusual. "They tell me they feel safe on the job because one or the other of them is either walking and holding a large power washer or in the large street sweeper truck," the witness said. On the other hand, both men told the witness they feel unsafe walking from and to their cars every morning.

Jose was questioned by police for about half an hour and then continued with his work.

"The last attack like today was about two months ago," the witness, who works on the Promenade said. In addition, the city maintenance machine shop has been robbed of tools twice in the last three months.