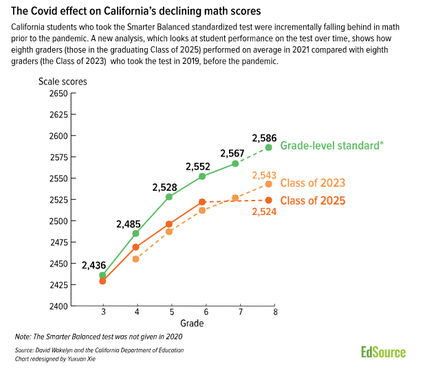 April 6, 2022 - A new analysis of state standardized testing reveals that the 2021 math scores of California's eighth graders were on the level expected of fifth graders.

According to the analysis by David Wakelyn, founder of Union Square Learning, published in Edsource Commentary, the drop in test scores began even before the pandemic, starting in third grade when the tests were first given.

Rick Miller, CEO of the CORE Districts, a multidistrict data and improvement collaborative, said the analysis revealed "massive gaps" in math learning that existed long before the pandemic.

Wakelyn first tracked the scores of students as they had progressed from third to eighth grade. He then compared those results with students who'd taken the eighth grade test before the pandemic, in 2019. He discovered that in 2021, the average scores of all subgroups of eighth graders were below standard with one exception. Asian students alone had math test scores that significantly increased last year, with average scores in the upper range of exceeding standards. Subgroups that averaged far below standard were Black, Latino, and low-income students. These subgroups of eighth graders had scores that approximated those of a fourth grader.

State officials and some experts warn against drawing immediate conclusions from these test results. Only about 24% of students elected to take the standardized test in 2021. Additionally, the Smarter Balanced test given to California students is an online test, and officials don't know the conditions under which students took the test. However, some of the conditions to which they point as possible aggravating factors - staffing shortages and frequent student absences during Covid - are exactly part of the problem being targeted. 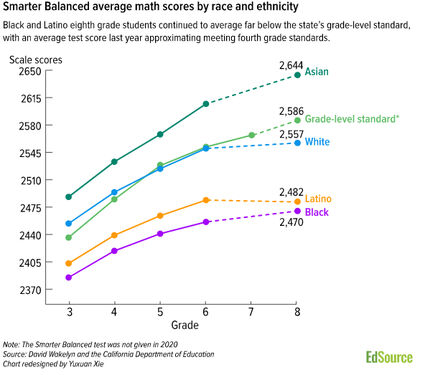 But not all of the problem. Wakelyn pointed out in his analysis that the mat results were far worse than the results in standardized tests related to English language arts. Reading and writing scores only reflected a small decrease in 2021 over previous years and were not much under grade-level standards. For this reason, Wakelyn called the poor math scores "a five-alarm fire."

Math is a difficult subject for most teachers. "We have long known that elementary school teachers struggle to teach math and as a result focus the bulk of their attention on literacy," said Arun Ramanathan, CEO of Pivot Learning, an Oakland-based nonprofit. And yet Governor Gavin Newsom proposed $500 million in his budget to train literacy coaches and reading specialists for high-needs schools and nothing even comparable for math and science. On the other hand, Assembly Bill 2565, authored by Assemblymember Blanca Rubio, proposes to spend $388 million over three years to create professional learning networks in math and science for the state's teachers and administrators.

This article is such bs. The person who wrote this must be some sort of racist to write an article as irresponsible as this. How can you write that “Subgroups that averaged far below standard were Black, Latino, and low-income students,”as a blanket statement? You should have listed which district have these low standards instead of blatant lies. Shame on the editors for approving this irresponsible article.