By John Alle and Alyssa Erdley
Special to the Observer

Adidas Store Robbed on Santa Monica's Third Street Promenade, Latest in Chain of Robberies, Fires and Harassments in the Area 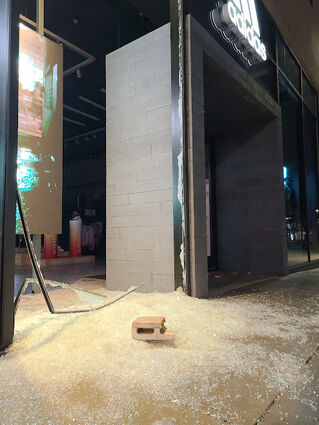 April 6, 2022 - The Adidas store on the Third Street Promenade was robbed at around 2:30 am this morning by an individual who smashed the storefront window with a cinderblock, used a fire extinguisher to hide his tracks after he took merchandise, and then exited through the rear door of the building.

Six police squad cars responded within 5 minutes of an initial call made by John Alle, a nearby property and business owner, who initially saw and heard the suspects inside the Adidas building. Alle's building was being tagged, and he was on the Promenade with his crew to clean up. An automatic security alarm sounded as well.

Police apprehended the robbery suspect, a black male, several blocks away in Downtown. One squad car remained on the scene for about 45 minutes to collect evidence. SMPD are continuing their investigation by reviewing video footage from nearby cameras. Building ownership was notified immediately of the need for board-up.

Following departure of the Police, passersby walked up and either looked in or stepped right into the open and dark store. But there was no sign of looting nor removal of items as of 5 am.

The current smash-and-grab robbery is one of a long string of robberies and other crimes that occur on a frequent basis on the Promenade.

The glass storefront of the same Adidas store was last smashed less than 5 months ago. That suspect was apprehended but released and seen again on the Promenade 3 weeks later.

The Footlocker Store at the corner of the Promenade and Arizona has suffered more than one smashed storefront in the last 9 months. This is in addition to etching of and human feces thrown against its windows during the last 10 months. Four months ago during the lunch hour, a black male was seen and photographed walking in to the Footlocker, grabbing merchandise, and walking out again. He then showed the victory sign to applause by several people outside the store. That suspect was photographed but has not yet been apprehended.

The Milken Foundation building at the corner of 4th and Arizona had its storefront smashed during the last 12 months. And this week one of the storefront windows of Core Power Yoga on 2nd Street was smashed.

The Promenade and Downtown are averaging three (3) smashed storefronts per month, according to Alle. Other crimes are occurring as well.

Last evening the manager of the popular Silverlake Ramen restaurant in the 1300 block of the Promenade acknowledged her concern about homeless walking in on a regular basis, stealing plates of customers' food and pushing drinks off tables.

Outdoor seating/barricades have been damaged several times at Casa Martin Restaurant in the 1200 block, along with harassment of customers. On one occasion, one of the restaurant's owners chased the suspect himself over several blocks until he apprehended him.

Ownership of both Barney's Beanery and Silverlake Ramen restaurants, both on the 1300 block of the Promenade, are hearing complaints about safety and concerns about disease from their janitorial crews and employees who now have to take their garbage 2 blocks away following the closing of Parking Garage 3. The remaining dumpster rooms in Parking Garages 1 and 5 have homeless living in them since the city government does not close and lock the garages, dumpster rooms, and elevators at night. The dumpster areas of Garage 1 and 5 have been the scenes of fires started by homeless and drug dealers.

Last week a recently-released felon was interviewed by John Alle, living in the Dumpster Room of Garage 5, a place "he called home," according to Alle.

Since the City's closure of Garage 3, there is no garbage area within walking distance for 3 of the Promenade's popular restaurants.

In an unusual twist to this story, Alle received two expensive parking tickets at 4 in the morning from Police Parking Enforcement. 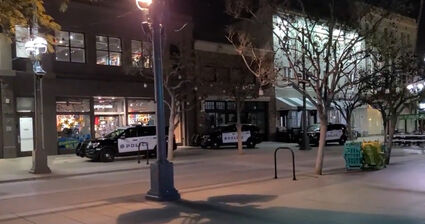 The most recent was this morning when police investigating and apprehending the suspect related to the Adidas' break-in felony recommended to Alle, for his own safety, that he move his car to Arizona from the alleyway behind his building adjacent to the rear door the suspect exited.

Several days prior to today's incident Alle pulled over and parked on Ocean Avenue when he witnessed a male smashing car windows with a heavy chain. He received a parking ticket at 3 in the morning.

So the City has NO security or on-foot patrols in its Downtown. Promenade, garages and alleyways between 11:30 pm and 6 or 7 am, but plenty of parking officers out waiting in the shadows with the homeless, anxious to issue $65 paring tickets. ONLY in Santa Monica.