She took a bath and was fed by her rescuers. No word about her owners 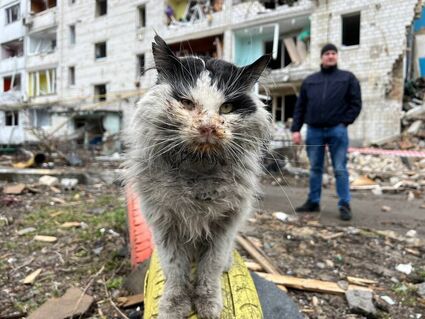 A very angry house cat was pulled from the wreckage of an apartment building in Borodyanko, Ukraine. Borodyanko is a town of 35,000 huma ns north of Kyiv, that was occupied by Russian troops for 4 weeks. The Russian Army has redeployed to Russia and to Eastern Ukraine. 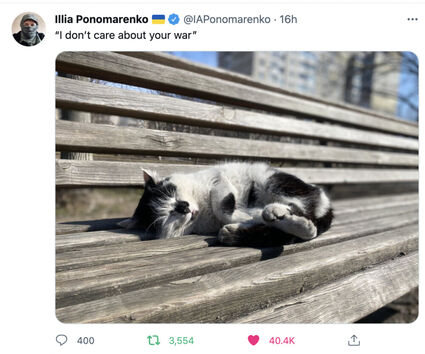 A cat in Kyiv

The cat was apparently no worse for the wear and tear. She took a bath and was fed by her rescuers. No word about her owners.

"𝔗𝔥𝔢 𝔇𝔢𝔞𝔡 𝔇𝔦𝔰𝔱𝔯𝔦𝔠𝔱 @TheDeadDistrict A cat that was pulled out from the rubble of a house in Borodyanka Very dirty and very angry at the Russians."

"i am so happy that this cat is able to enjoy another one of its nine lives. Thank you Ukraine. Evil Russian Army must be thrown out of Ukraine." tweeted Taras Shevchenko.

"Poor sweet cat in need of much love and care!" tweeted another, noting that there is a notch in the cat's ear indicating she's a stray who's been spayed.