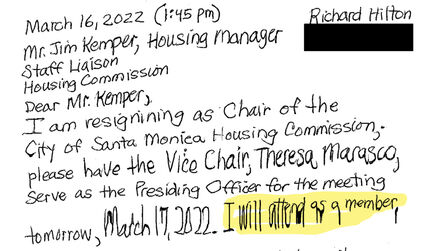 The following is public input offered before the City Council on April 12, 2022:

By now you've received time sensitive notice of misconduct by City staff. I am here to amplify that notice.

For months, staff in several offices have been making unilateral decisions that enable professional misconduct by a Housing Commissioner and appear to intentionally impede good work.

These shenanigans happen to coincide with your new Housing Commission appointments-folks who are deeply committed to transparency and fixing problems at the Housing Authority that I and other community members have been pointing out for years.

City Staff are making individual and small group decisions resulting in the following:

• Overlooking the former Chair's misconduct against other commissioners;

• The unexplained refusal of staff to operate the BlueJeans app at the last Commission meeting;

• The sudden and unexplained claim – 2 1⁄2 weeks after the fact – that the former Chair's handwritten and signed resignation as Chair somehow meant something else, that he didn't resign, and that, somehow, he is still Chair despite the Commission's uncontested March meeting announcement of the Chair's resignation and of an upcoming new Chair vote at the next meeting;

Mayor Himmelrich, add a formal investigation to the April 26th agenda or Item 13, because the public will not stand for apparently intentional collusion to undermine the earnest efforts of your newest appointees.