All anyone has to do is walk down the street, and they will soon be confronted with evidence that attention to law and order is not a priority in this city 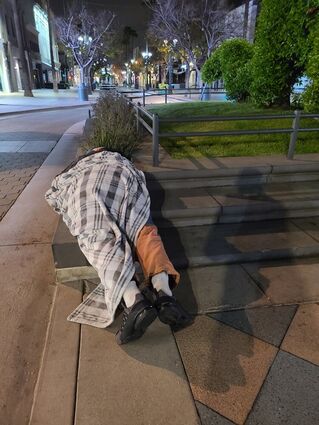 April 12, 2022 - City officials at all levels are struggling to respond to the recent news reports ranking Santa Monica as one of the least safe cities in California. In an Open letter, City Manager David White and Police Chief Ramon Batista - both relatively new hires - claimed they have heard residents' fears and dismay and are taking aggressive action to restore the city's safety. Meanwhile, Barry Snell, the Interim Chief Executive Officer of Downtown Santa Monica, Inc., wrote a letter to "Santa Monica Stakeholders" disavowing any responsibility for the crime downtown and claiming to have "consistently lobbied" for more police presence in the area.

The claims of all participants in this public chest beating are specious, at best.

All anyone has to do is walk down the street, and they will soon be confronted with evidence that attention to law and order is not a priority in this city, and particularly not in the downtown or on the Third Street Promenade - once a regional draw. It certainly is not an appealing place to visit any more.

With a high vacancy rate, the Third Street Promenade has become the haunt of the homeless. John Alle, a local business and property owner, wrote on Sunday morning that the downtown area was in "turmoil and disarray." There was vomit all down the center of the Promenade, human urine and feces in front of almost every storefront, discarded needles, canisters of nitrous oxide, beer and wine bottles. "The area cordoned off in front of 1212 Restaurant had homeless shooting up in the open."

The police department is at a record low in terms of staffing. But not to worry. Batista is launching "an aggressive recruitment campaign." Really? What has he been waiting for?

With low personnel, the police department is using drones as substitute human officers. This is allegedly a "force multiplier" to address high-risk calls. A drone can arrive on scene minutes after an emergency call is placed and establish communication with the 911 caller. That will be helpful! You can talk to a drone while you're being assaulted. I'm sure your attacker will be properly terrified by a flying camera.

Meanwhile, Downtown Santa Monica, Inc, a quasi-governmental agency that collects dues from local property and business owners, washes its hands of all responsibility for the current state of the area - given they can no longer claim a problem doesn't exist. "Only the Santa Monica Police Department can enforce our laws," wrote Barry Snell. He went on to claim, "DTSM has consistently lobbied for a greater police presence along the Third Street Promenade." 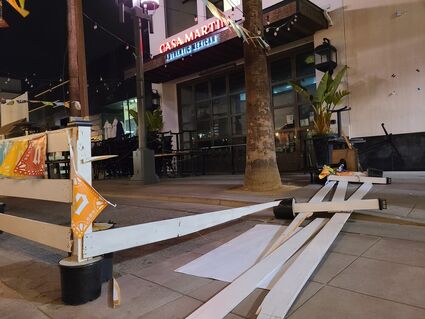 Fence destroyed on Third Street Promenade, only part of the destruction from the previous night

This claim is vigorously disputed by Alle, who pays dues to DTSM. "You must be kidding," Alle wrote in reply. "You, Barry, your predecessor Kathleen Rawson, and many on your Board have NOT consistently lobbied for a greater police presence..." In fact, Alle claimed, "you have stated just the opposite." Alle wrote that Snell argued in meetings in opposition to frequent police foot patrols and more cameras.

Instead of police, DTSM uses a "social advocacy organization," Block-by-Block to maintain order in the downtown corridor. However, business owners say the Downtown Ambassadors hired by Block-by-Block are useless, unable or unwilling to prevent crime and anti-social activity or to help homeless individuals in crisis. They would like to cancel the $450,000 contract and use the money for more police or even the sheriff.

Gaslighting the public can only get you so far, particularly in as small a community as Santa Monica, where every resident has had direct experience with the crime and homeless anti-social activity that have become an unfortunately familiar aspect of daily life here.

I've lived here since 1996. Of course, it has never been so, so bad. The days when the crowds were huge--with a Starbucks inside the Barnes and Noble, (which drew midnight crowds for the breathless release of the latest Harry Potter book); when the Disney Store occupied a prominent corner; when that silver-face paint robot-mime large black man entertained crowds; when The Screening Exchange handed out free passes to upcoming screenings---are long gone. The radical SM government---SMRR fanatics led by the now-disappeared Kevin McKeown, and today's battery acid radical council members Gleam Davis, Sue Himmelrich, and Kristin McCowan---have destroyed downtown SM with their far left wing agenda. They will tell you it's the retail apocalypse/Covid/Putin, whatever, but the fact is that the situation was deteriorating even before the 2016 arrival of the choo-choo train. Other regional cities, Pasadena/Newport Beach/Ventura/Culver, continue to look good/attract people, while SM rots.