Russia Conducts Memorial Service for the Cruiser Moskva in Sebastopol, As Mystery of Missing Crew Deepens 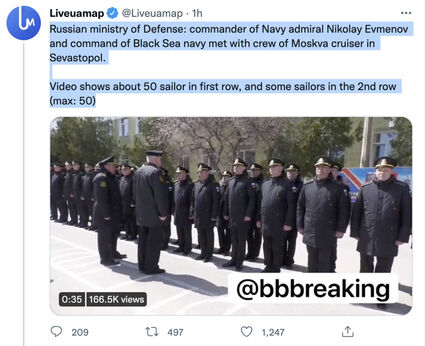 Update 4/17: The first video of survivors from the Russian Black Sea Cruiser Moskva has appeared in Russian media. It appears to show about 50 uniformed survivors from the crew of 510. Presumably they were removed from the sinking ship on April 14th.

This from Liveuamap on Twitter: "Russian ministry of Defense: commander of Navy admiral Nikolay Evmenov and command of Black Sea navy met with crew of Moskva cruiser in Sevastopol. Video shows about 50 sailors in first row, and some sailors in the 2nd row (max: 50)"

The Russian story remains that a fire onboard caused an ammunition explosion. She was being towed back to Sebastopol when she flipped over and sank. The Ukrainians agree that the Russian Black Sea Fleet's flagship Cruiser Moskva sank on April 14th, 2022.

The Russian account of the sinking is however, is different. Somehow a fire broke out on board. Ammunition was ignited, and later the 611 foot long warship flipped over and sank. The entire crew of 510 was rescued by the Russian Navy, and also by a Turkish ship that happened by.

The parking lot by the dockyard is still filled with parked cars, waiting for men who have not returned to claim them.

"It is possible now that the Kremlin will never reveal any info on how many Moskva crew members have been killed," tweeted Illia Ponomarenko, a writer for the Kyiv Independent. "You know, they have this law entitling the military to keep the “peacetime”death toll secret. It’s been close to 3 days now, still not a single word." @IAPonomarenko

On Twitter the betting is that few crewmen were recovered from the sinking ship. You can judge for yourself. A story about the memorial from local website Sebastopol.com reads as follows:

"Today in Sevastopol there was a ceremony of farewell to the cruiser. On the mourning ribbon it says "to the ship and sailors." 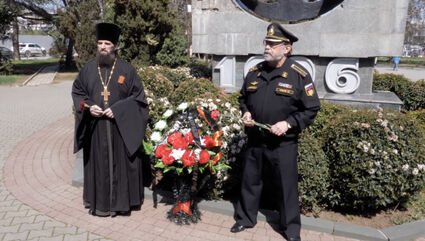 On April 14, the Moskva cruiser was seriously damaged by the detonation of ammunition , provoked by a fire on board. The ship remained afloat, but on the way to its home port in stormy conditions it lost its stability and sank . The crew was evacuated.

"I would like to say" good afternoon ", but my tongue does not dare to pronounce the word" kind ", - Captain 1st Rank Sergey Gorbachev, Secretary of the Military Scientific Society of the Black Sea Fleet, addressed the dozens of people gathered.

He noted that the Moskva cruiser, which was the flagship of the Order of Nakhimov for more than 20 years, not only sank, but died during the fighting. And he thanked the maritime community of the hero city, all those who gathered, who "like real Russian people - at the call of their hearts, without instructions from above," decided to commemorate the legendary cruiser.