1000 Civilians are with the trapped soldiers. "We ask the world for help in evacuating the wounded, children, women and the bodies of those lost." 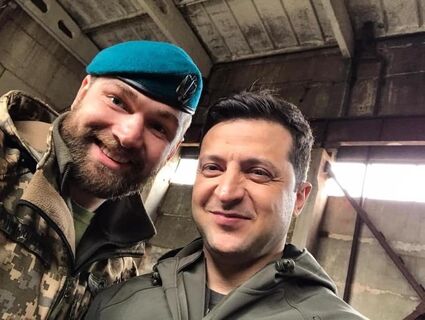 "I, Sergey Volina, the commander of the 36th separate brigade of the Marine Corps named after the rear-admiral Mikhail Belinsky, address you from the concerned Mariupol:

Editors note: Ukrainian troops in Mariupol are confined to a large factory with 6 underground levels. There are thought to be 700 Ukrainian troops, outnumbered ten to one by Russian forces, in far Southeastern Ukraine. About 1000 civilians are hiding from the Russians, with the Ukrainian soldiers. This about 30 miles from the border with Russia. On 4/18, one of their commanders posted the following to Facebook:

I, Sergey Volina, the commander of the 36th separate brigade of the Marine Corps named after the rear-admiral Mikhail Belinsky, address you from the concerned Mariupol

For more than 50 days, the city defenders have been heroically holding the defense, despite the opponent's prevailing forces and constant air bombing, artillery and missile shelling. Mariupol is still a Ukrainian city, no matter what Russian propaganda speaks to you. We fight stern battles every day and restrain thousands of enemy troops without letting him progress. This comes at the cost of superhuman efforts and great losses.

But we need your help. The enemy took the city in the ring and holds hundreds of thousands of civilians hostage. Women, children, including babies are being intercepted in our military bunkers. Mostly relatives of our military, who are wanted by the Russians. No heat, water, food.

Our wounded die in unbearable torment daily as medicines, disinfectants, pain relief opportunities are long over.

The Ukrainian authorities agreed with the Russians about humanitarian corridors, involving the mediation of Turkish President Rajep Erdogan. However, the Russian side did not keep its word and all efforts turned out to be in vain.

We ask the world for help in evacuating the wounded, children, women and the bodies of those lost.

Trying to do this was too little!

We urge world politicians, public and religious figures not to be indifferent to people who are not in the trap of Mariupol.

Now we, the military, are forced not only to fight the enemy's superior forces, but also to take care of over a thousand civilians.

Don't believe Russia's promises of a "green corridor" for military. There is no doubt that it is a hoax to destroy the Ukrainian military group in Mariupol without a fight. 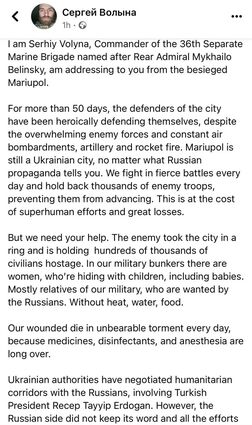 We will not give up and we will fight to the end.

But our oath of allegiance is not enough for the release of Mariupol.

The city needs an unblocking immediately.

We need heavy weapons for this. In the power of the EU countries and the USA to provide it to us.

Heavy weapons for the defenders of Mariupol will save the Ukrainian military group.

Mariupol can be saved. We are ready to fight to the last drop of blood. But we need to know that the world has done its best to do so. Then we are ready to do even the impossible for our country.