SMPD interviewed Thomas and other witnesses, and wrote an incident report, but made no arrests.

Bagger at Ralph's grocery company hit a customer for videotaping him and his manager.

A Santa Monica native was attacked by a bagger at the Ralph's grocery store on Cloverfield, when he complained to the manager about two vagrants blocking the entrances. The vagrants were a man and a woman with a child, and were holding up whiteboards asking for money.

The customer (we'll call him Thomas), complained about it to the manager. She shrugged her shoulders and said "What do you want me to do about it?" "Thomas" told her to ask Security to remove them. He them proceeded to do his shopping, but when he got to the check-out, he noticed they were still there. He again spoke to the manager about it, but this time, he pulled out his phone and began videoing their conversation. 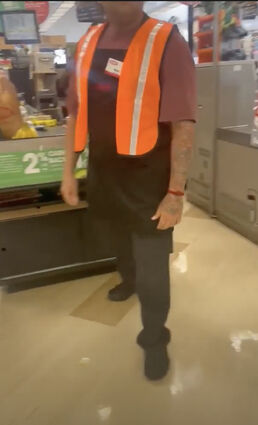 Bagger at Ralph's grocery company hit a customer for videotaping him and his manager.

This caused the bagger to become irate, and he attacked "Thomas", slugging him several times. Thomas did not fight back, but ran to the door, with the bagger chasing him. He called SMPD, who arrived about 20 minutes later. As he was waiting outside, several shoppers approached him and told him they had witnessed the assault, and gave him their names and phone numbers. Nonetheless, SMPD decided not to make an arrest in the case.

"His language got salty and he was attacked by a store employee. SMPD refused to arrest the box boy and just gave him a police report number," said one of Thomas' neighbors, who added that Thomas is a longtime resident who frequently shops at Ralph's on Cloverfield and Olympic Blvd."

Thomas said today that he was suffering from numerous aches and pains. "I can't even turn my neck", he said.

Note: "Bagger, packer, sacker or bag boy (US), is an unofficial title given to a courtesy clerk at a grocery store," says Wikipedia.

Security should have removed Thomas. While the bagger May be a little short tempered i see why he did what he did.

They're bagging customers who ask for safe passage over at Ralph's.

That bagger should of been arrested, fired and sued! So sick of beggars everywhere! Every corner! Every entrance! None of them legit!!

This is an example of being suckered into reading the story. The cops figured out that the employee did just fine. Thomas is and was the problem

No arrest! Employee not fired. Santa Monica as a city is losing quality of life with high crime and soft enforcement of laws. A beautiful city being taken down by left wing radical administration.

Ralphs is a repudiable company, HOWEVER, this situation requires that Ralph's take responsibility for the employees attack. Do the right thing now Ralph's, before your good public image is further tarnished. PAY UP NOW RALPHS, or suffer unnecessary bad publicity today and tomorrow.