"An oil facility directly responsible for the flow of #Russian oil to Europe is on fire in #Bryansk, #Russia. Next to it, just a few km away, a Russian military base is on fire." 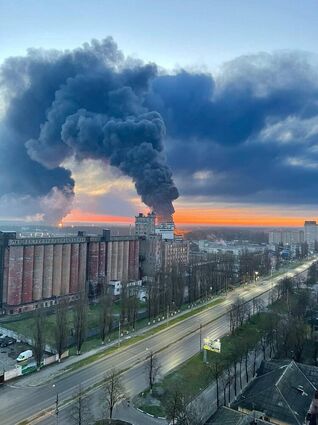 An oil depot is on fire and the probable cause is a raid by Ukraine army helicopters. The fire is in about 100 miles Northeast of Kharkiv, Ukraine in Bryansk, Russia. Secondary explosions at a different location, perhaps a mile away from the location of the first fire, were visible on Twitter and Telegram.

"An oil facility directly responsible for the flow of #Russian oil to Europe is on fire in #Bryansk, #Russia. Next to it, just a few km away, a Russian military base is on fire. Glory to #Ukraine✊🏻🇺🇦," tweeted Canadian Ukrainian Volunteer, an anonymous foreign soldier fighting for the UAF.

“ It sounds like this was an air or missile strike. Most likely, a Tochka-U tactical ballistic missile, which has the range to reach both targets if they are deployed close to the Ukrainian-Russian border.” Tweeted Rob Lee, a weapons expert.

"I still can’t get it how this thing in Bryansk was possible," tweeted Illia Ponomarenko, a reporter for the Kyiv Independent. "It’s either Ukraine has a godlike UAV operator team, or Russians did this themselves. Or the West gave us something no one is talking about 😳."

The fire broke out on Monday night at an oil depot, says RT.com. "Local residents report that explosions were heard. Sirens can be heard in social media videos.

According to locals, explosions and fire occurred in several districts of Bryansk. According to unconfirmed reports, the second source of fire originates in the area where the military unit of the 120th arsenal of the Main Missile and Artillery Directorate of the Ministry of Defense is located.

Emergency services began to evacuate residents of houses near the burning oil depot. 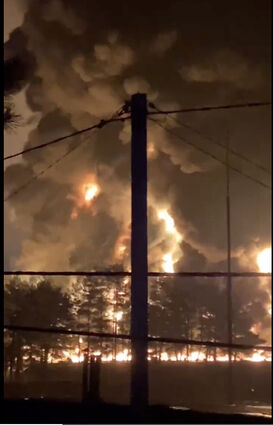 The Ministry of Emergency Situations confirmed the fact of ignition. Officials have not yet commented on the causes of the incident.

RT.com is an English language news website run by the Russian government.

There were the usual conspiracy theories on Twitter that this was an inside job, a "false flag"operation conducted by the Russians themselves to blame the Ukrainians. But the damage to the oil infrastructure and ammunition nearby, seemed too extensive.

An alternate theory is Russian generals, or even Russian soldiers, seeking to avoid being deployed to Ukraine, had set the fires.