Ironic, since Russia's stated goal in Ukraine was to "demilitarize and deNazify" their neighbor 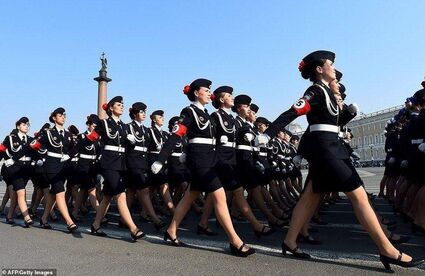 Twitter is abuzz with parade practice photos from Moscow, where the army is practicing for the annual World War II Victory Day parade on May 9th. No one is quite sure how it happened exactly. But some units, in particular the RU women's army units, look remarkably like SS parade uniforms in World War II.

The red arm bands bear numbers rather than swastikas (or Z's), standing for which row the soldiers are supposed to occupy. But they look like Nazi uniforms. Which is ironic, since the Russian's stated goal in Ukraine was to "demilitarize and deNazify" their neighbor. The Russians have at times behaved rather like Nazi's in how they target civilians, some on Twitter would say. 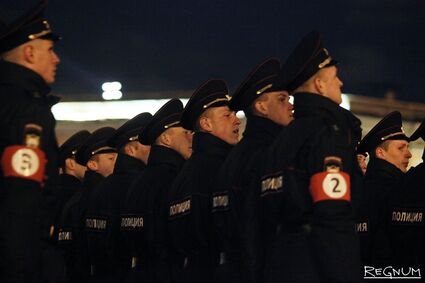 Russian police officers, all of them in this photo men, wearing black uniforms and black arm bands with white circles and numbers.

Pure spitballing & armchair psychology ... but I can't shake this feeling that a lot of this whole horror is about some weird working out of a WW2 inferiority complex that, filtered through subsequent events, sees even the Soviet victory as somehow not enough to get respect ... so" tweeted Benjamin Tallis, an International politics expert focusing on Russia.

There is little available information on the current status of women, who are not conscripted, in the Russian Ground Forces, says Wikipedia. According to the BBC, there were 90,000 women in the Russian Army in 2002, though estimates on numbers of women across the entire Russian Armed Forces in 2000 ranged from 115,000 to 160,000. Women serve in support roles, most commonly in the fields of nursing, communications, and engineering. Some officers' wives have become contract service personnel. https://en.wikipedia.org/wiki/Russian_Ground_Forces