This evening men of all ages across Russia started to receive general mobilization notices from their local military command. 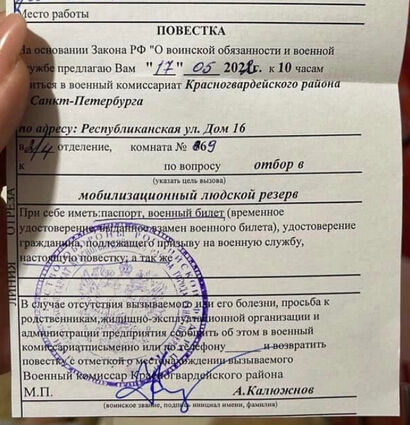 On Twitter it is reported that Russian men are receiving notices drafting them into the Russian army.

A photo of a mobilization notice was posted to Facebook. "Unannounced mobilization! Today we handed a summons to the military registration and enlistment office to my son's friend, the guy is 39 years old, no children. This is St. Petersburg! Posted on Facebook." says the caption. Former US Ambassador to Russia believes the notices are authentic. 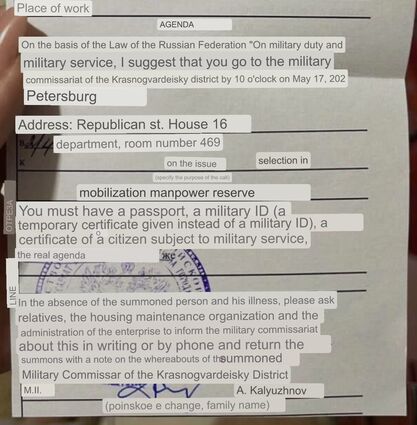 Some on Twitter thought the notice had been photoshopped. To what end? Others suggested we are reading the Russian wrong. This is simply a letter to a reservist, inviting him to apply to be a contract soldier. (In my opinion, the Russian is somewhat ambiguous).

"A full-on mobilization is extremely costly [and] puts Putin in the territory where there are risks to the stability of his regime," says @nataliyabugayova. "Russians may be supporting the war [but that] doesn't mean they want to fight and die in it."

Russian President Vladimir Putin ahead of the Victory day celebration on May 9th said: - "Today, our soldiers, as their ancestors, are fighting side by side to liberate their native land from the Nazi filth with the confidence that, as in 1945, victory will be ours."

The Russian Ministry of Defense as late as Saturday denied that there will be a general mobilization. They now appear to have lied.