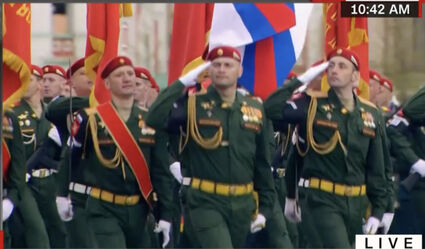 Putin said that they had to invade after the United States and the West refused to negotiate for security guarantees. He did not mention Ukraine by name or make any announcements about changes in policies or mobilization. He did draw vague comparisons to Russia's defeat of the Nazi's and the current struggle in the Donbass.

The air portion of the victory parade in Moscow was cancelled, said defense secretary Dmitry Peskov, due to “unexpected weather conditions”. Today’s weather in Moscow was clear and calm, so the real reason for the air show cancellation is mysterious. My own theory: With so many Stinger missiles in Ukraine, the risk of a Ukrainian sympathizer attempting to shoot a plane out of the Z formation, was simply too great for the parade flyby.

Putin drew comparisons to "the Russian defeat of Naziism," with the current security situation. He said Russian forces were defending the motherland, as goose stepping soldiers filled Red Square

“Last December (2021), we proposed an agreement on security guarantees. Russia called on the West to have an honest dialogue, to find reasonable compromises, to take into account each other's interests. All in vain. NATO countries did not want to hear us. there were completely different plans.“

According to Putin, Russia "has always advocated the creation of a system of equal and indivisible security" so that the horrors of global war do not recur.

From the New York Times: There was no claim of victory or “mission accomplished” and no promise that the fight in Ukraine could end soon. But there was also no call for new sacrifice or mobilization, no threat of a nuclear strike, no stark pronouncement about Russia being locked in an existential war with the West.

Instead President Vladimir V. Putin stood in Red Square in Moscow on Monday, on Russia’s most important secular holiday, and delivered a message for the broader Russian public: that they could keep on living their lives. The military would continue fighting to rid Ukraine, in his false telling, of “torturers, death squads and Nazis,” but Mr. Putin did not make any new attempt to prepare his people for a wider conflict. 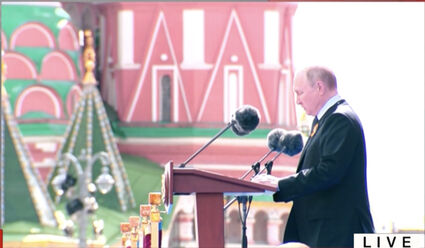 Putin Says he Invaded Ukraine Because US and the West were Threatening Russia and Refusing Security Guarantees.

The calibrated tone shows that while some Western officials predicted Mr. Putin would use the May 9 holiday to double down on the war, he remains cautious about demanding too much from regular Russians. The only policy announcement Mr. Putin made in his speech, in fact, was one aimed at assuaging the pain directly caused by the war — signing a decree to provide additional aid to the children of killed and wounded soldiers.

“He has developed a certain sense of what is and is not possible,” said Gleb O. Pavlovsky, a close adviser to Mr. Putin until falling out with him in 2011, explaining why the Russian leader does not appear ready to order a mass mobilization. “He understands that no propaganda can by itself force someone to die.”