"You were also in this courtroom when James Franco said that he saw no injuries to your face on May 22, 2016?" 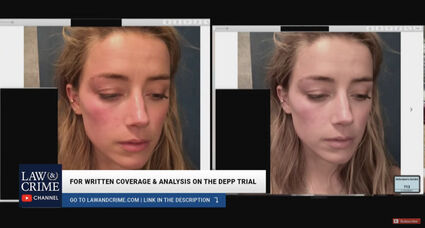 Testimony in the much watched Amber Heard vs Johnny Depp trial continued on Tuesday in a Virginia Courtroom. Depp's attorney Elizabeth Zellner accused Amber heard of editing the photos of May 2016 showing that Amber had been struck on her cheek and injured by Johnny Depp. The actress said the light may have been more yellow in the photo on the left, "like the lights on a vanity mirror," and that this explained the difference in the two photos.

"You sat in this Court room while officer Zeins saw you, and testified that he didn't see any injuries on your face."

AH: Officer said she didn't considered my red puffy face injured. That was her testimony in the UK.

Atty: That's just inconvenient for you, isn't is Ms. Heard. The other officer also said he saw no injuries on your face on May 21, 2016.

AH: They said they didn't consider what they saw on my face to be injuries.

Atty: You were also in this courtroom when Alejandro Romero testified that he saw no injuries on your face on May 21 2016, weren't you?

AH: No that's not what he said.

Atty: You were also in this courtroom when James Franco said that he saw no injuries to your face on May 22, 2016?

AH: No, that isn't what he testified.

AH: No that's incorrect. I don't know what I knew about Mr. Depp's schedule at that time.

Atty: You testified you were trying to prevent Mr. Depp from entering the house to do drugs at that time, right?

AH: I was trying to prevent him from doing drugs in front of his friends.

Atty: Is it your testimony now that Mr. Depp does drugs in front of hit friends?

AH: No, well yes, he didn't care who saw him doing drugs.

Atty: You didn't use your bruise kit this time to cover it up?

AH: My best friend saw me in the bathroom,, and told me not to cover it up this time.

Atty: You wrote this op ed, did you not Mrs. Heard? And it was published on December 18, 2018? And Aquaman was released on December 22, 2018, is that correct? And it was your first time having a movie of that size with you as a leading role?

AH: Yes it was the first time I had a leading role in a movie of that scale, yes.

Atty: Friends and advisors told you that you would never work again in Hollywood, because you were not associated with Domestic violence, is that correct?

AH: I said that, yes. I would be blacklisted because I was associated with domestic violence.

Atty: You said in the editorial that a powerful man like Johnny was a ship, and people in Hollywood would want to patch him up, isn't that correct?

AH: This editorial is not about Mr. Depp. He is not the ship in the analogy, I meant powerful men in general, not Mr. Depp.