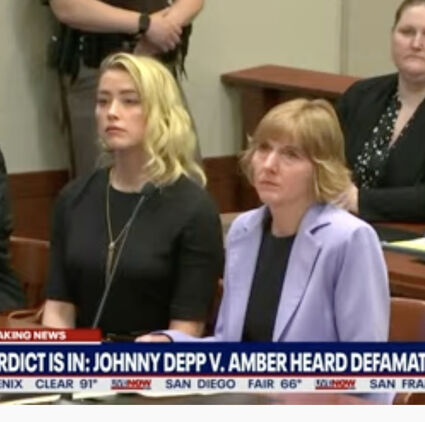 Amber Heard and her attorneys listening to the verdict.

12:20 PM PST: The Jury found all the elements of a Virginia defamation case were present against Amber Heard, and that she defamed Johnny Depp. They set a monetary award in the amount of $10,000,000, plus $5 million punitive damages. The same jury also awarded Heard $2 million for the "Waldman Statements," wherein Depp through his agent Waldman called her allegations of abuse "a hoax." Compensatory damages for her only--no punitive damages.

Punitive damages in Virginia are capped at $350,000. So in effect the verdict is $8,350,000 against Heard, probably forcing her to examine bankruptcy options.

The verdicts are said to be inconsistent. If her allegations of his abuse were not a "hoax," then she could not have defamed him by calling Depp an abuser. Subject to post trial motions and an appeal, where they may not stand.

Heard issued a statement saying that this verdict was a set back against all women and against freedom of speech. "I'm sad I lost this case, but I'm sadder still that I seem to have lost a right I have as an American, to speak freely."

Depp's team also issued a statement. "Six years ago my life and the lives of my children were forever changed all in the blink of an eye. False very serious and criminal charges were leveled against me. It travelled around the world twice in a nano second. six years later the jury gave me my life back. I am truly humbled. The decision to pursue this was made with considerable thought".

12:10 PM PST: The Jury initially found for Johnny Depp, but they failed to set an amount of compensatory and punitive damages. Judge Penny Azcarate sent the Jury back into the Jury box to deliberate.

The Judge silently read the verdict. Depp was not present, as he was performing in London. But Amber Heard and her lawyer were front and center, they were present for the verdict.

Most people predicted that Depp would win. "He's already won in the Court of public opinion," a friend told me. Lisa Montgomery Kennedy predicted last night that Amber would be ordered to pay Depp back the $5 million he paid her as a result of their divorce settlement. She pledged to donate the money to the ACLU and other charities, but did not.

Personally, my money was on Amber to pull out a win. She needed only to prove that he physically abused her once, and she wins, because it means she was telling the truth about him. I see Johnny Depp as an admitted drunk and a drug addict, who's lack of control came out in trial. Can anyone seriously doubt that Depp abused Heard on one occasion?

Don't get me wrong, Amber is a piece of work, too. She undoubtedly did some of the horrible things to Johnny that he claims. But they both hung around for a three year marriage. What people need is often not what they think they need.

Most predict that Amber Heard will be ordered to pay Johnny millions, for casting him in a false light in a 2018 Washington Post editorial. The trial was a window into a drug filled alcohol soaked world some celebrities apparently inhabit. In their Sweetzer avenue apartment, Depp reportedly spent $30,000 a month on wine. "That's an insult," he reportedly said. "My wine bill was much higher than that."

Heard, who play Mera in the Aquaman franchise, threw a bottle once at Depp and severed his finger, he claims. He also says he was not cast in Pirates of the Caribbean 6 due to her publicly defaming him as a wife abuser. Meanwhile, she says he abused her sexually and physically, then went on a public campaign to ruin her with litigation, suing her in Virginia and also in the UK. 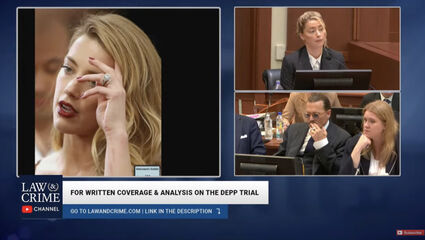 Meanwhile, the world is watching the most gripping trial in 30 years. A friend of mine who lives in Moscow reports everyone there is watching this trial, too. Anyone who's ever been in a dysfunctional relationship, and that's most of the folks I know, can relate to loving someone who's toxic. And I do mean both of them.

"I spoke up against Domestic Violence, and Face the Public's Wrath. That Has to Change" was the title of Amber's Wapo article, which does not mention him by name. She says he abused her on at least 2 dozen occasions.

The two met in 2009 while filming "The Rum Diaries." He was 44 and she was 20, but Heard says there was "an instant connection." She says that while they had chemistry during the movie, they started dating in 2011 while on a tour for the movie. She says the abuse started in 2013, but they married at their Beverly Hills home in February 2014. He filed for divorce in late 2016, it was finalized in 2017.

Live coverage of the verdict. https://youtu.be/89M3fJt53mQ