Fire Dept Now says an illegal fire at "an encampment" caused the blaze, which burned trees 30 yards away from $10,000,000 condos. 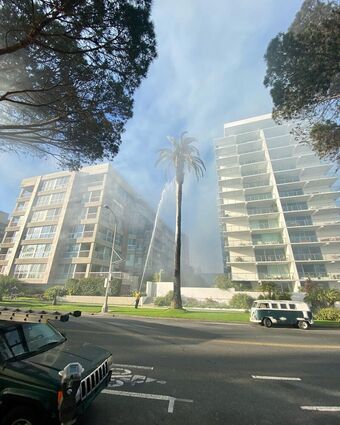 Santa Monica Fire Dept confirmed Tuesday morning that the fire was caused by a homeless encampment. There were no injuries. Press release below.

6.13.22: A brush fire in the 500 block of PCH has closed traffic in both directions from 7 pm until 9 pm Monday, said the City of Santa Monica in a tweet to residents. The brush above PCH is known to be frequented by homeless people. One can see them walking up and down the hills and into Palisades Park. But it was not immediately known whether their campfires or other activities caused the blaze.

The Santa Monica Fire Department had responded to the fire, which involved less than a full acre.

The alert from the City of Santa Monica read as follows: "SM Alert: SMFD Advisory Santa Monica Fire is responding to a Brush Fire in the 500 Pacific Coast Highway block of California Incline. PCH closed in both directions due to a brush fire just north of the California Incline near 500 Block of PCH. Closure expected to last until 9pm. Use alternate routes. Avoid the area. Delays and hazards are possible.To unsubscribe from SMAlert texts, reply STOP"

This is the third or fourth brush fire in a year in the cliffs between PCH and Palisades Park.

The press release from the Santa Monica Fire Dept. reads as follows: On Monday June 13th, 2022, at approximately 6:20 p.m. the Santa 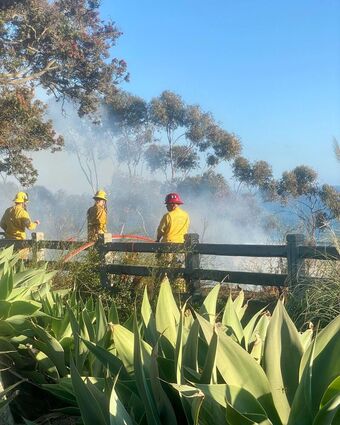 Monica Fire Department received multiple calls reporting a fire in the Santa Monica Bluffs on the 500 block of Palisades Beach Road. Firefighters arrived within minutes and found an approximate 50' x 100' fire in heavy vegetation on the bluffs that was being spread uphill by prevailing onshore winds. A coordinated fire suppression effort was made from both the top and bottom of the bluffs to confine and suppress the blaze.

It took firefighters approximately 1 hour to knock down the fire, plus several hours of overhaul to ensure the deep-seated smoldering heat on the hillside was cooled and suppressed. The fire also forced the closure of Palisades Beach Road in both directions for 2 hours. Despite the intense fire and embers in the nearby area, firefighters kept the fire from spreading beyond the bluffs. There were no reported injuries to responders or civilians. The fire appears to have originated within an unattended encampment, however the cause was undetermined. Capt. Patrick Nulty, SMFD PIO.