"Do these photos show that services are being provided?" 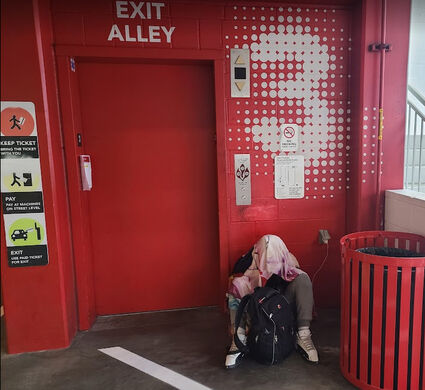 People with shirts over their heads are typically doing drugs: in the public garage

June 15, 2022 - Pools of urine, tagged walls, drug addicts, and homeless squatters greeted downtown Santa Monica property owner John Alle as he arrived early to work the morning following the City Council meeting that approved extending the contract with Allied Universal Security. The security company is charged with patrolling the seven public garages and associated alleyways overnight until 6 am in the morning. The Block by Block Ambassadors take over patrol duty at 6 am, but often show up at 3 am in order to bill extra.

"One would think the day of and the day after the City Council approved a lucrative contract for Allied Universal Security...the two employees would at least show up to do their job," wrote Alle in an email to the city council and city manager. "The amount of vagrants in the Garages increased throughout the evening and early morning."

According to Alle, the Block by Block Ambassadors are no more effective. Instead, they ignore the mentally ill and drug-addicted homeless who block the stairwells they need to use to get to their office on the first floor of Garage 6. According to Barry Snell, in his op-ed in the Santa Monica Mirror, the Ambassadors are trained to perform homeless outreach and always call the police when it is necessary. This does not appear to be the case. 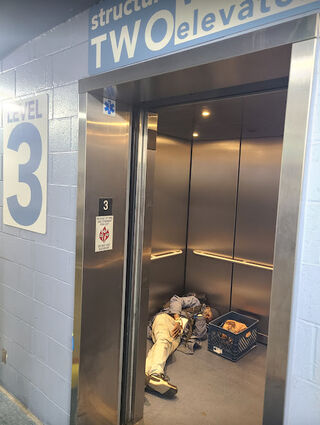 The public elevators are commonly used as bedrooms by homeless squatters

Alle has been advocating the city beef up their own police presence in these publicly owned spaces and also that they contract with the LA County Sheriff's Department, who have a proven track record of moving the homeless to more appropriate spaces.

Sheriff Villanueva, copied on the email, wrote, "Private security and/or unarmed ambassadors are no substitute for the real thing." In fact, Barry Snell had agreed in his op-ed, admitting that ambassadors are not law enforcement officers and cannot physically remove criminals nor halt antisocial behavior. "There is no track record of their success anywhere that faces homelessness and violent crime," Villanueva wrote. He warned that the city faces a "degradation of the quality of life" and an "attendant drop in tax revenue." Unarmed security is not a credible substitute for true law enforcement. "Look no further than San Francisco's Tenderloin District for the fate that awaits Santa Monica."

(See below for more photos)