Lightning Over Los Angeles; Rain Falls For a Few Minutes in Santa Monica on June 22 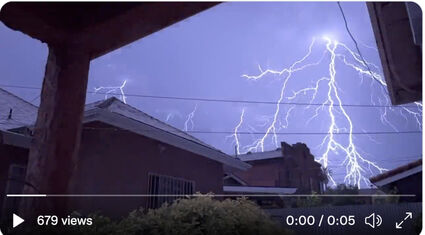 Lightning Over Los Angeles; Rain Falls For a Few Minutes in Santa Monica on June 22

6.22: A thunderstorm dropped less than a tenth of an inch of rain over West LA Wednesday. A light dusting of rain fell on Santa Monica just after 7 pm. Moisture was measurable but barely.

Clouds obscured the sun intermittently on the day after the summer solstice. It was alternately hot and cool by the Santa Monica bay.

Tragically, lightning struck and killed a young woman walking two dogs in El Monte near a dry river bed. The dogs were also killed by the lightning.

A brush fire in Kern County was said to have been caused by lightning as well. Fire fighters had the 40 acre fire 10% contained at 7 pm.