The explosives were removed safely after nearby residences evacuated 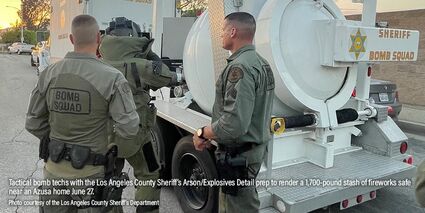 LA Sheriff Bomb Squad on the scene in Azusa

A tip developed by a Community Violence Reduction Division investigator led to the seizure of 14,000 pounds of illegal fireworks in Azusa ahead of the 4th of July weekend.

In a press release, Los Angeles District Attorney George Gascon said, "By embedding our prosecutors and investigators in the communities that we serve, we were able to secure valuable information that led to the safe removal of thousands of pounds of illegal fireworks."

The district attorney's office investigators, working with the Azusa Police Department and the Los Angeles County Fire and Sheriff's departments, also seized more than $10,000 in cash and an illegal firearm during the June 27th operation.

One person was detained and the investigation into the possession and sale of illegal fireworks is ongoing.

The fireworks seized were being stored at a home and a storage facility in Azusa. Twenty-seven homes were evacuated while the explosives were safely recovered and disposed. 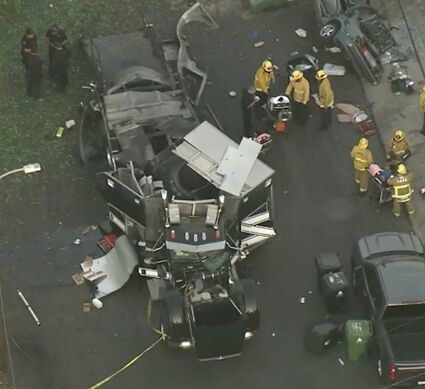 Last year, a "human error" by the LAPD bomb squad caused a catastrophic explosion during an illegal fireworks seizure in South Los Angeles. Of the 32,000 pounds of illegal fireworks found in a resident's backyard, some were found to be leaking material. Deemed too dangerous to transport, the bomb squad decided to detonate them in a special disposal truck. But the bomb technicians miscalculated the weight of the explosives, and the resulting blast injured 17 people, damaged or destroyed 13 businesses, 22 residential properties and 37 vehicles.

Fireworks are illegal in Los Angeles County unincorporated communities and many cities in the county because of the brush fires, house fires, millions of dollars in damages, injuries, and even death they may cause. Residents are encouraged to report any illegal fireworks to law enforcement.