The show will be visible for miles

Pacific Park on the Santa Monica Pier's Ferris wheel will fly a 90-feet tall American Flag for the Fourth of July weekend celebration, along with a spectacular display of patriotic red, white and blue colors, patterns and transitions. The flag will 'fly' Friday-Tuesday, July 1-5. Ferris wheel light show - Sunset (about 8:09 p.m.) to 12:30 a.m. The show can also be viewed virtually at https://www.pacpark.com/live

Independence Day in the United States is celebrated annually on July 4th and commemorates the signing of the Declaration of Independence in 1776. The Continental Congress declared that the 13 American colonies were no longer subject to the monarchy of Britain and were united, free, and independent states.

July 4th is commonly celebrated in the United States with fireworks, parades, backyard barbecues, picnics at the beach, organized civic ceremonies, and more 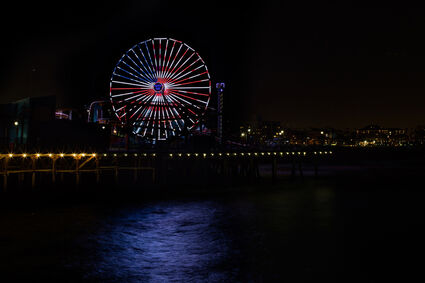 Everyone wants to celebrate the flag in creative ways