Starbucks Underneath the Santa Monica Pier Closes Due to Homelessness, Crime, Unsafe Conditions

Santa Monica is furious about the crime and dirt, but probably not angry enough to stop voting for those who allowed this level of crime 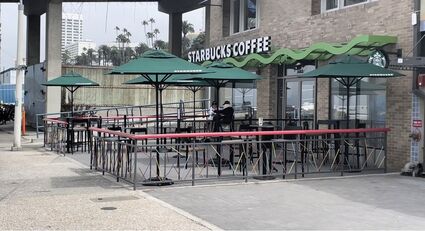 Citing safety, Starbucks has closed this retail location under the Santa Monica Pier.

It is a landmark known around the world. The Santa Monica Pier is 112 years old, but this is the first year where retailers have had to close stores due to "unsafe conditions." Starbucks cited safety as the reason the woke corporation was closing six west coast stores, including one on Hollywood and Vine, and one on the Santa Monica Pier.

People in Santa Monica are furious about the crime and dirt in their formerly beautiful city, though not necessarily angry enough to stop voting for the politicians who allowed this level of crime. Sheila Kuehl, for example, has been on the Los Angeles County Board of Supervisors representing the Westside for 20 years. She believes the problem is Sheriff Alex Villanueva, the one local politician actual willing to relocate homeless people away from tourist areas. She wants voters to give the 5 member Board the power to remove the separately elected Sheriff.

"A store on the Promenade recently decided to close and vacate their space," posted one resident on Facebook. "The employees were not feeling safe and they were also having trouble hiring and retaining people. Their landlord offered a year of free rent to stay open, they still chose to close. A store will not even stay open in Santa Monica FOR FREE!!! What does that tell you?"

"WOKE Ceo of Starbucks shares how unsafe America has become… he should have been more specific, how unsafe blue cities have become.

Armen Melkonians is a candidate for Santa Monica City Council. He posted the following about the recent news from Starbucks:

I had an interesting conversation with a powerful businesswoman last week. We met through the stench of urine in the stairwell of a public parking garage. Both of us holding our breath, rushing up the stairs towards the door that would provide our lungs with breathable air once again.

I know what you are thinking . . . . Santa Monica parking structure? Nope. But the first thing out of her mouth when we reached clean air was , “That was disgusting, it reminds me of Santa Monica.” I immediately replied, "Hey! I live in Santa Monica.” And she said, “Sorry! I just refuse to go there anymore.”

After talking with her for a bit, I found out she’s a Vice President, in charge of product placement, for a major national retail chain with 1,500 brick and mortar stores; one of which is located on the Third Street Promenade. She told me that she just stopped visiting their Third Street Store and that she won’t go back unless things change in Santa Monica. She said, “It’s sad, that what once was a beautiful street had turned into an unsafe and dirty place.” She also told me that, based purely on safety concerns, their Third Street store was having a problem with employee retention. She said they have six available positions there and have a real problem keeping the store staffed. She also added that it has never happened before.