Death in the Parks of Santa Monica

Quality of life crimes say to residents and tourists is that nobody is supervising this public space; the result is death 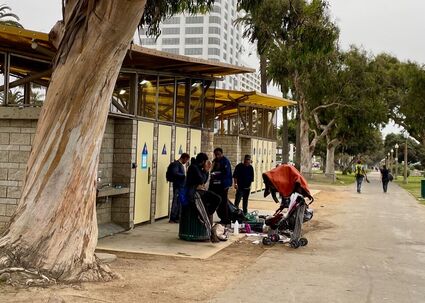 It was with sadness that I read this in a recent story in The Santa Monica Current: “The One Thing you need to know is that SMPD responded to a call at Palisades Park last night for two unresponsive men behind a restroom. One man was pronounced dead at the scene and the other was taken to a local hospital. There were no signs of foul play but officers did find drug paraphernalia nearby.”

Sadness, but not surprise. Because this is a photo I took recently of the area at the top of the California incline where the man died. You know—the one with a beautiful seating prow, suggestive of a sailboat, that juts out over a grand view of the entire Santa Monica bay. Just twenty feet away from that beautiful spot is now an open-air drug market.

Today I am wondering which of the poor souls who smoke meth and crack all day outside those bathrooms was the one who died of an overdose. Two to four transient addicts die in Santa Monica every month. Who will be next?

I put crime in two categories. One kind is active, violent, or criminal. That would describe the actions of the person who threw a full cup of coffee in my face and tried to attack me with a pipe downtown in broad daylight two months ago. (That person is awaiting sentencing for assault with a deadly weapon.) The other kind is passive and disorderly, like doing drugs in broad daylight. It’s important to address both kinds of crime, even though most people focus on the former, “more serious” kind.

But what the quality-of-life crimes say to residents and tourists is that nobody is supervising this public space. If addicts can take hard drugs in public, and defecate wherever, and sleep it off whenever, and engage in other antisocial behavior in broad daylight without any consequences, citizens come to feel that anything can happen. And if anything can happen in our abdicated Commons, it can happen to them. So they stay away. And businesses don’t come to the promenade. (Some have refused an offer of free rent because they fear for their employees’ safety.) A vicious downward spiral takes hold.

This is just simple human psychology. LA County residents and tourists come to our city to take a break from their daily grind. They don’t come to wallow in human misery, which they can’t avoid in Santa Monica: I have hundreds of pictures of drug addicts “chasing the scream” all over the city, living only for the next fix.

But what I want to focus on here is the idea of compassion. Is it compassionate to walk past people who are slowly killing themselves in our parks, on our streets and promenade, openly doing drugs with no intervention? Deep down, we all know that it isn’t, and that it hurts our hearts and souls to turn away. Some among us think it’s compassionate to enable addicts and “help” them with untried and nonsensical programs. But many street people in Santa Monica don’t want our help and have lost the ability to make good decisions for themselves. Saving their lives rather than enabling their deaths is what real compassion looks like. It requires active intervention.

If you don’t believe me, I invite you to take a walk of misery past the doorways in my neighborhood. It is a tour of failure—as a city, a county, and a state, and as a society, because we lack the courage and common sense to do what is right. Gavin Newsom will finally pass Care Courts, and Santa Monica must aggressively use them, and all other legal means, both to save lives on our streets and to return our parks and sidewalks to residents and tourists, whose first stop is often Palisades Park, where several open-air drug markets fester.

You don’t need more pictures. You don’t need to prowl downtown at 4 am to see what I saw—what we all see—when I recently walked three blocks of the promenade at 4 pm: fifteen mentally ill or high individuals sleeping it off, or actively smoking meth, or talking to trees. No “serious” crime was being committed, but the strong sense is that the area is unsafe.

If we want our city to thrive, we can’t accept this. Nor can we accept the idea that we can build our way out of the problem. That is old thinking, pushed by our current mayor and whomever she endorses. Her fear of “becoming Beverly Hills” is unconnected to the reality of our daily crime and overdoses. Santa Monica must aggressively address the disorder that is blighting our tourism industry, making residents feel unsafe, and retarding our recovery. We must also do it for the sake of the chemically enslaved people who are disintegrating on our streets.

This is why I’m running for City Council. I’m not a politician, just a progressive resident of Santa Monica for 30 years. I’ve bought a condo here and started a production company and two nonprofits (I’m a founding member of Compassion Prison Project, through which I learned from the incarcerated themselves what works and what doesn’t). I’ve been a management consultant for Fortune 500 companies specializing in organizational change, and I currently work as a creative executive in the tech industry. I’ve been a problem solver my whole life.

I’m running because I love this city, and I actually work and live a block away from the heart of it, our downtown. 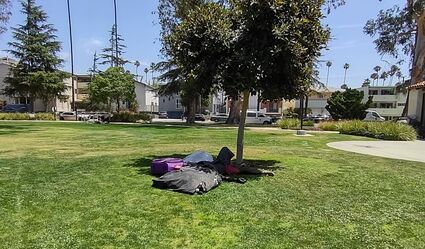 I’m running because we have an opportunity this year to replace establishment members of the council who are ossified by the old thinking that enabled the looting of 5/31, ignores what’s happening on our streets now, and is willing to accept the state’s mandate for 9,000 new units of housing by 2028, which would destroy what makes Santa Monica exceptional.

I’m running because we have an opportunity to finish the change started by Phil Brock, Christine Parra, and Oscar de la Torre.

I’m running because my overall vision is that we must embrace, restore, and preserve our exceptionalism and magic, not choke what makes us so special that people come from all over the world to visit. We can’t stand by while our parks, libraries, sidewalks, and promenade are overrun and destroyed because we lack the courage to do the right thing.

I’m running because I’ve had enough. Haven’t you?