Young feline appears to have been abandoned by Russian soldiers when they left snake island three weeks ago. 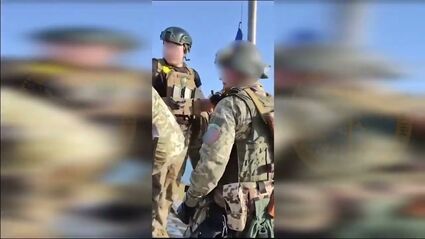 In the video, one soldier is seen handing the small black cat to another soldier. It was not immediately know what condition the cat was in, or where she was taken.

"Ukraine's military intelligence operators, among other missions, have evacuated a cat 🐈 that has lived months under Russian occupation on the Snake Island and was abandoned," tweeted Illia Ponomarenko. 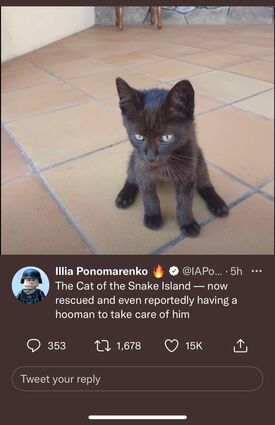 The 24 acre island is located in the shipping channel between Odessa and the Bosphorous in the Black Sea. It is strategically located, but barren.

The Russian troops that took it early in the Ukraine Russia war, were recently forced to abandon it. The US has supplied Ukraine with high precision rockets such as HIMARS, that made it impossible to erect any military infrastructure on the island, at least for the Russians. The Russian army said they abandoned the island in June 2022 as a "goodwill gesture" to Ukraine.

The video may be viewed on Twitter at the link below: