Sue, it is your measure that is the definition of an unsupervised slush fund that will burden Santa Monica forever 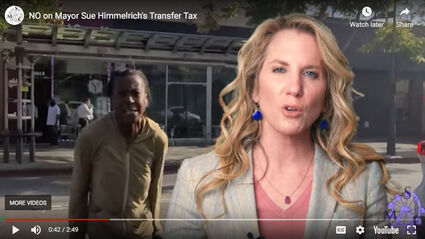 It was with dismay that I watched both your orchestrated attacks on councilman Phil Brock's alternate tax transfer measure at the July 12 City Council meeting (http://santamonica.granicus.com/ViewPublisher.php?view_id=2). It was the definition of bad faith.

Michael Soloff, in your labored straw man argument, you called Councilman Brock's measure a "poison pill." You used every cliche in the canon to push for endless construction that will do nothing for the transient addicts and mentally ill inundating Santa Monica and seen in the background of this video (https://www.youtube.com/watch?v=AODjoKYTOTQ&t=44s). The hard truth is they need group homes or institutions, not thousands of $800,000 apartments that will destroy the character of Santa Monica.

Sue, in an incredible case of political projection, you called Councilman Brock's measure a "slush fund" even though it's subject to standard City control. You endlessly questioned his right to bring an alternative measure to the floor, implying it was a personal affront to you, rather than giving the voters a choice.

Let's be clear about the two measures. Phil Brock's is a moderate ballot measure to raise money ($15 million) needed while we recover from the pandemic. It has a sunset clause and will be under control of the City Council. This is important: the money will go into the general fund controlled by the duly elected representatives of the people. You know, democracy. It will also allow the flexible use of these funds because as the pandemic has taught us, we can't foresee the future.

Alternately, Sue, your personal ballot measure, raised while mayor of Santa Monica so that the average person thinks it's from city government, is not moderate. It's 800% of the current tax, and an even greater percentage of the average transfer tax of cities across California. It has no sunset clause, so will last forever. It will NOT be under direct city council control, but will be administered by an 11 person panel chosen by a political process that is shielded from the electorate. This means money to your constituents, developers, and whomever else you want, because it won't be controlled by direct City Council vote and won't be transparent. And importantly, it will not be responsive to the city's changing needs for decades to come.

So Sue, it is your measure that is the definition of an unsupervised slush fund that will burden Santa Monica, forever. Why would you sponsor this all by yourself? Simple. You are leaving the council, but still want control of what amounts to more than 10% of the total city General Fund-forever. You and your cronies will get to dole out money like old Chicago pols who refuse to relinquish control to whomever you want, for whatever you want. Bottom line is it's about power and control, not homelessness or seniors.

You also claimed that the two measures shouldn't exist on the ballot at the same time (giving the voters a choice), because you did "some research" showing that if two measures exist, it's likely neither will be chosen. I looked high and low for this "research" and couldn't find it anywhere; instead, I found hundreds of competing ballot measures, including this year with competing California gambling initiatives (Prop 26 & 27). Either one of the measures needs only a majority of votes on the ballot to pass. In Santa Monica's 2014 election, there were two competing ballot measures (D and LC) regarding the airport. This is not new to Santa Monica, even though it's apparently new to you.

Finally, Sue and Michael, as longtime establishment players, you are asking us to concede power and control of over 10% of SM's General Fund to your hidden agenda, forever. Sue, you're essentially asking us to trust your judgment. Well Sue, I don't trust you, your agenda, or your judgment, which you are trying to continue through your ballot measure, (and which is partly why I'm running for city council). You're out of touch with our residents' number one concern of safe and clean streets. Instead of trying to get elected, you are pursuing an endless development agenda disguised as a concern for the homeless. Moreover, Los Angeles is nowhere near doing anything like SM on the Westside. All of this is cover for building to the state's unsupportable 9,000 unit diktat in 6 years. I will fight it tooth and nail.

Another reason I don’t trust you is because while part of city council you presided over the catastrophic failure of 5/31, allowing our city to be looted in an utter lack of leadership, responsiveness, or foresight. Similarly, you continue to turn a blind eye to a disintegrating downtown from hardcore criminal addicts and the severely mentally ill who need immediate intervention, not an $800,000 apartment built “someday” by your slush fund, while you make developers rich.

Make no mistake, this is tied to your luxury belief systems while ignoring the reality of working people in Santa Monica, who simply want clean and safe streets, the first duty of government. Luxury belief systems are against a “police presence” on the promenade, part of a sick belief that the police are the problem and that residents don’t want to see them around, when actually they are begging for them. You are not in touch with the reality of the transient “homeless” on the streets now, many of whom are addicted, dangerous, and do not want housing. Yet you shamelessly exploit the issue, even calling up that old 70s trope about seniors eating cat food. You keep saying you don’t want Santa Monica to be Beverly Hills, another straw man argument because nobody wants that and SMRR guarantees it will never happen. It’s all just so much bad faith. 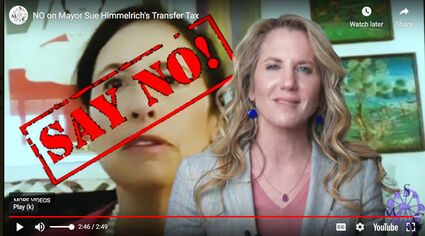 Finally, the condescension, entitlement, and bullying I saw on dais coming from you towards the other council members was breathtakingly dysfunctional. It’s time to continue the change started by Councilpersons Phil Brock, Christine Parra, and Oscar de la Torre.

For now, I strongly encourage the council to ignore Sue’s “tax the rich” falsehoods and allow both measures on the ballot this fall, so the voters can decide which makes more sense. Because, unlike what you claimed, Sue, either one of the measures needs only a majority of votes on the ballot to pass. I trust Santa Monica residents to choose.

It’s called democracy, Sue. Get used to it.