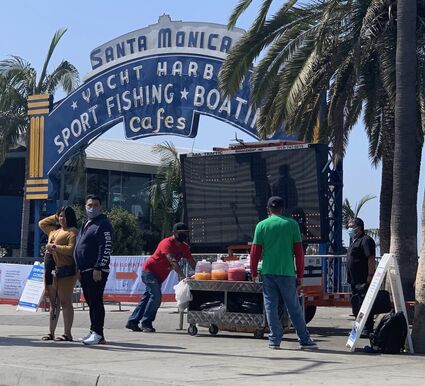 Pushcart vendors at the entrance to the Santa Monica Pier.

A street vendor has sued Santa Monica in federal court, alleging that the city is targeting Black and Latino people by illegally towing the vehicles of unlicensed drivers.

Reyes Murcia alleges in the proposed class-action complaint that Santa Monica is targeting poor Black and Latino people by depriving them of their property in violation of the Fourth Amendment while "arbitrarily" imposing an unjustified impound fee, according to the civil rights lawsuit filed last Friday in Los Angeles.

The suit also names as defendants Santa Monica Police Chief Ramon Batista, City Manager David White and All City Towing, which operates under a contract with the city. The plaintiff alleges that the city's vehicle seizure policy causes an unlicensed driver's vehicle to be impounded without a warrant "in order to coerce" its owner to pay a fee, "despite the registered vehicle owner being capable to produce or direct a licensed driver to operate the vehicle," the suit says.

Murcia contends that his 2006 Chevrolet Tahoe was impounded after Santa Monica police officers stopped him in a parking lot for having a broken rear tail light. During the stop, the vendor says, he was asked for his California driver's license but was only able to produce an expired Mexican license.

Murcia also alleges the Chevy Tahoe was not a traffic hazard nor was it a danger to the community, but the officers impounded the vehicle anyway because, they told him, he did not have a California driver's license, according to the lawsuit.

The plaintiff contends he found out that the fee to release the vehicle would be $159.90 and, in addition, the city charges a 30-day impound fee of $1,128.

In his suit, Murcia asks that a federal judge find the city's vehicle seizure policy unconstitutional, that the Chevy Tahoe be returned to him, and that he be awarded damages and court costs.

At press time on Friday, the City of Santa Monica released the following statement on Reyes Murcia lawsuit: 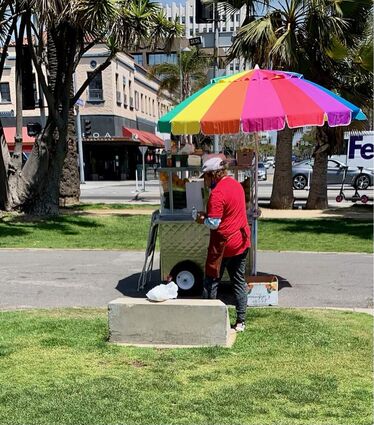 “The City of Santa Monica is aware of the pending class action civil rights lawsuit against the City, which also names personnel within the Santa Monica Police Department and City Manager’s Office.

Due to the pending litigation, the City is unable to provide details in response to inquiries related to this matter. The City of Santa Monica and Santa Monica Police Department are committed to the values of accountability, equity, inclusion, and safety, and to protecting and supporting communities of color in our City.

Our police department is deeply committed to protecting our City in accordance with the U.S. Constitution and treating all with dignity and respect. Our officers are professional and compassionate and dedicate themselves to maintaining public safety while building trust in our community.”