Up in Smoke: A special, and intimate Q&A session with two of the world's favorite comedians: Cheech And Chong. 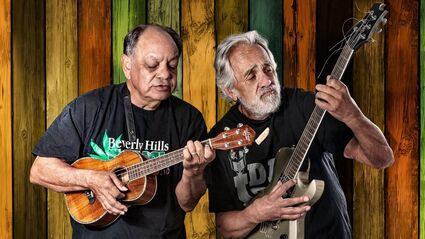 One half of the stoner-hippie comedic duo Cheech and Chong, Richard "Cheech" Marin has become perhaps one of the most well-known and respected Chicano achievers in the world of entertainment. As an actor, director, writer, musician, art collector and humanitarian, Cheech is a man who has proven that he has the intellect and wit to make a simple smile appear in any situation. At the side of his partner Tommy Chong, he enjoyed immense off-color comedic success in the 1970's before moving into a diverse range of roles, having appeared in more than 20 films, including Spy Kids, Tin Cup, and Once Upon A Time In Mexico. His television credits include co-starring with Don Johnson in the popular CBS drama, Nash Bridges, a recurring role on the hit series Lost, and a guest appearance on Grey's Anatomy.

Grammy Award winning comedian Tommy Chong is legendary for his invaluable contribution to American counter-culture as part of the iconic comedy duo Cheech & Chong. During their reign, the twosome recorded six gold comedy albums, including the 1973 Grammy winner "Los Cochinos," and starred in eight films, most of which Chong co-wrote and directed. The first, Up In Smoke, was the highest grossing comedy of 1978, topping $100 million at the box office. Others were Cheech and Chong's Next Movie (1980), Nice Dreams (1981), Things Are Tough All Over (1982), Cheech and Chong: Still Smoking (1983), and The Corsican Brothers (1984).

Tommy has appeared in several films including 1990's "Far Out, Man!"" and "National Lampoon's Senior Trip" (1995). Chong has also starred, most notably, as "Leo" on Fox's "That 70's Show," and has guest starred on ABC's "Dharma & Greg" and "The George Lopez Show." Chong recently released his new book entitled Cheech and Chong: The Unauthorized Autobiography about the exploits of the infamous duo's smoke-filled world. This book serves as a follow-up to his New York Times Best-Seller The I Chong: Meditations from the Joint which chronicles Chong's arrest for shipping bongs across the country as well as his days in jail and the humorous encounters of his 9 month prison stint. Earlier this year, the highly anticipated, award winning documentary A/K/A Tommy Chong was released worldwide.