Comparison of satellite images of Saky airbase near Novofedorivka, Crimea shows Russian airbase was hit with a major explosion 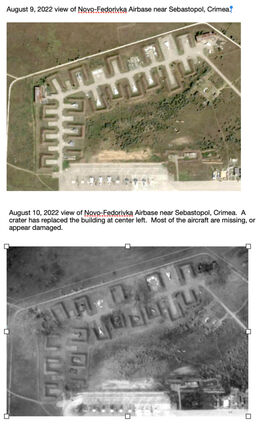 Images have been posted to Twitter and other social media, showing that a major Russian Air Force Base was heavily damaged by Tuesday's explosion.

A series of large explosions occurred at Saky Airport in Novofedorivka on August 9, 2022, during the Russian invasion of Ukraine heavily damaged the airfield. The airport had been seized by Russian forces during the 2014 annexation of Crimea, part of the Russo-Ukrainian War. 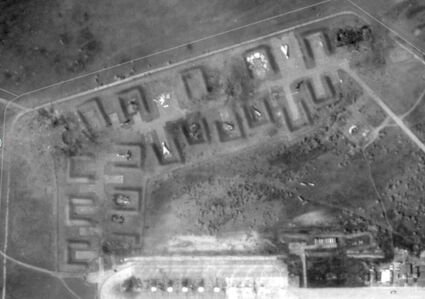 August 10, 2022 view of Novo-Fedorivka Airbase near Sebastopol, Crimea. A crater has replaced the building at center left. Most of the aircraft are missing, or appear damaged.

Russian authorities declared a state of emergency and yellow-alert level of terrorist threat, but explained the explosions as the result of an accident, and said one person was killed, over a dozen wounded, and 252 residents moved to temporary shelter due to damage to apartment blocks. Ukrainian authorities didn't take responsibility for an attack, but stated that nine Russian planes had been destroyed in the preceding day, and unverified social media footage showed at least one destroyed jet fighter at an airport. A senior Ukrainian military official anonymously stated that special forces and partisans were responsible.

It is located about 3 kilometres (1.9 mi) south of the regional centre of Saky, and about 70 kilometres (43 mi) north of Sevastopol. Formerly a base of Soviet Naval Aviation as "Saky-4", it came under the Ukrainian Navy control with the breakup of the Soviet Union. It was captured by Russian forces without resistance on March 22, 2014, during the annexation of Crimea. This from Wikipedia.

The base is used by the Russian 43rd Independent Naval Assault Aviation Regiment operating Su-24M/MR and Su-30SM aircraft.