"I want to be clear there's still much more work to do," SMPD chief Batista cautioned. 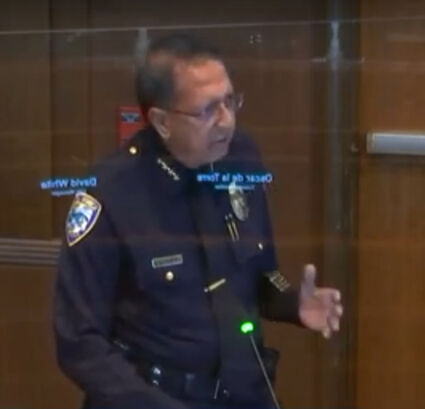 August 24, 2022 - Santa Monica Police Chief Ramon Batista gave a rosy picture of strides forward made by the department in cutting crime over the past few months at a City Council meeting last night. Along with adding additional officers to the downtown area, SMPD conducted five "Public Health and Safety Operations" that had been conducted with various subdepartments in the police force over the past month. Over the span of 8 weekends, in which these operations were conducted during the last 3 weekends, there was a near 50% reduction in Part 1 and Part 2 crimes for the 3 weekends of the operations over the previous 5 weekends without the additional police activity.

Part 1 crimes are more serious offenses, such as homicide, robbery, and aggravated assault. Part 2 crimes include offenses such as vandalism, disorderly conduct, and prostitution. Batista reported that the safety operations resulted in numerous arrests for public intoxication, weapons violations, and theft. They also resulted in the capture of numerous offenders wanted in other jurisdictions for outstanding warrants, including for homicide, aggravated assault, and arson.

The proactive work by the police department also resulted in a reduction in calls for both homeless- and nonhomeless-involved incidents. However, the calls reporting homeless encampments are "far outpacing" previous years.

The increased police activity resulted in a 30% increase in arrests over this same point last year. The city attorney reported that their case filings are "double what they were a few months ago" and that "our prosecutors are maxed out."

However, when City Councilmember Oscar de la Torre characterized the new efforts as vigorous and said he felt "assured we're being more aggressive in our approach," Batista corrected this characterization.

"I want to be clear there's still much more work to do," he cautioned. "We have a lot to do and that is continuous." 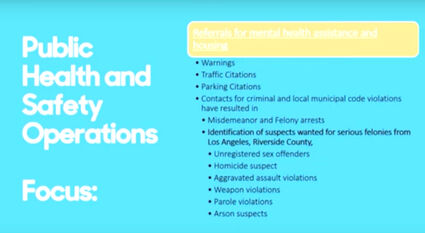 Batista was unclear regarding how many officers had been hired to fill the many empty spots in the police force, but it appeared to be around 18 new hires. He said these were a "balance of" trained officers ready to hit the streets and new cadets who will require 18 months of training. In May, the department was 57 police under the budgeted number for the force. Batista explained the slow growth of the department by saying he "won't sacrifice quality" in order to maintain a police force of "amazing culture and very high standards."

Between June 1 and August 17, there were 24,000 calls for police service citywide. These were handled by a police force of 174 officers plus whoever of the new hires has been ready to go on patrol immediately, a number Batista was not clear in providing.